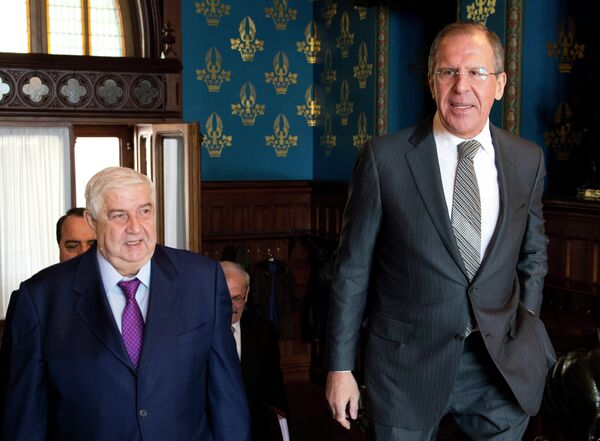 Moscow’s position on Syria stems from its concern for the Syrian people, and not the fate of President Bashar al-Assad, Foreign Minister Sergei Lavrov said on Monday.

MOSCOW, February 25 (RIA Novosti) - Moscow’s position on Syria stems from its concern for the Syrian people, and not the fate of President Bashar al-Assad, Foreign Minister Sergei Lavrov said on Monday.

“Russia’s position is not predetermined by support of personalities; it is dictated by concern about the fate of the Syrian people, our long-standing friend and partner, and the fate of a country which has a very long history,” he said at a news conference with his Syrian counterpart Walid Mouallem.

The United States has called for Assad to step down, but Russia says it is concerned that the Syrian president’s forced departure would make the conflict worse.

Russia would like to see Syria as an independent and united country with all sections of society living in peace and stability, regardless of their political sympathies and resolving their domestic problems without outside interference, Lavrov said.

The number of political forces favoring a political settlement in Syria is growing, Lavrov claimed, adding there is no acceptable alternative to a settlement through a political dialog between the Syrian government and the opposition.

“There are sensible forces that are becoming increasingly aware of the need for an early start of negotiations and a political settlement. The number of those supporting this realistic line is growing,” he said.

The situation in Syria is at a critical point, with the escalation of the conflict threatening the disintegration of the Syrian state and society, he said.

Mouallem repeated the Syrian government's claim that the conflict in Syria is “a war against terrorism” spearheaded by al-Qaeda.

“One of al-Qaeda’s branches is conducting the main combat actions in Syria and it has brought into Syria militants from 28 countries, including from Chechnya,” he said.

He reiterated the Syrian government’s readiness for dialog with the opposition, “even those with weapons in their arms.”

Russian Deputy Foreign Minister Gennady Gatilov said last Tuesday foreign military supplies to Syria’s armed opposition have been growing. He reiterated Russia’s official position that Moscow will not carry out fresh arms deliveries to the Syrian government, but is only supplying arms and military equipment under contracts signed before the civil war, which has claimed some 70,000 lives according to the latest UN estimates.

Last Monday, Lavrov denied Moscow had tried to smuggle arms components into Syria via Finland, and said there are no Russian troops in Syria apart from several dozen technical staff at the Tartus naval support facility.

Russia’s state-run arms dealer Rosoboronexport said on Wednesday it is supplying air-defense missile systems and maintenance and servicing equipment to Syria, but not combat aircraft.

Russia has repeatedly denied media reports that it was sending warships to Syria and delivering new weapons to Damascus.