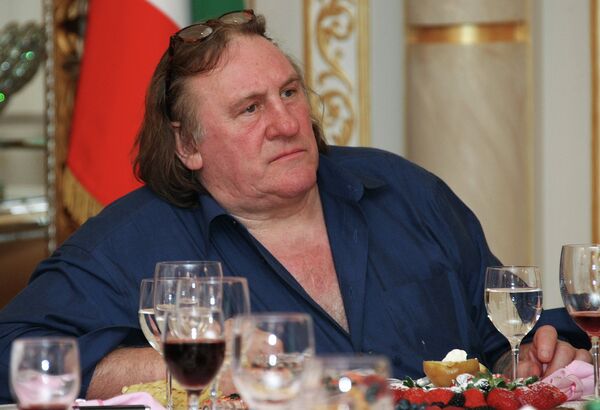 © RIA Novosti . Said Tsarnaev
/
Go to the photo bank
Subscribe
French actor Gerard Depardieu plans to make a movie about Chechnya, the regional government reported on Monday, after he arrived in the republic to meet local leader Ramzan Kadyrov.

MOSCOW, February 25 (RIA Novosti) – French actor Gerard Depardieu plans to make a movie about Chechnya, the regional government reported on Monday, after he arrived in the republic to meet local leader Ramzan Kadyrov.

“I want to film a movie here to show that one can make a movie in Grozny, a big movie,” said Depardieu, who received Russian citizenship in January from President Putin. “I can’t disclose any details about the movie, but I know we will come back here, and it’s only the beginning,” the actor was quoted as saying by the Chechen government’s website.

Chechen leader Ramzan Kadyrov turned up at the regional capital Grozny's airport on Sunday to meet Depardieu, who flew in after visiting the republic of Mordovia, where he officially accepted his Russian residence registration.

“I have just handed to Gerard Depardieu the documents for a five-room apartment and a certificate of honorary citizenship of the Chechen Republic,” Kadyrov wrote on his page in the Instagram photo website.

It was not clear if the apartment was given to Depardieu or whether he had purchased it himself.

Depardieu collected his Russian passport at a meeting with President Putin in the Black Sea resort of Sochi on January 6. He renounced his French citizenship ahead of the government’s planned implementation of a 75 percent tax rate for annual earnings above $1.3 million. Russia has a single-band income tax of just 13 percent.

Depardieu is no stranger to Chechnya, a North Caucasus region which has been at the center of over two decades of violent conflict between Islamist separatists and forces loyal to Moscow. He visited Grozny last October for Kadyrov's 36th birthday, when he said: “Glory to Chechnya! Glory to Kadyrov!"

Kadyrov hosted a dinner in his honor with a show by Chechen dancers on Sunday. “I wanted to see what I saw several months ago – your dances. This is the first reason [for my visit],” Depardieu told reporters in Grozny.

Russian state television showed Depardieu joining in a traditional Caucasus dance known as the lezghinka, with a locally-dressed woman, and cheerfully hugging Kadyrov.

Kadyrov has previously hosted famous actors on visits to the republic, including Jean-Claude Van Damme and Hilary Swank.