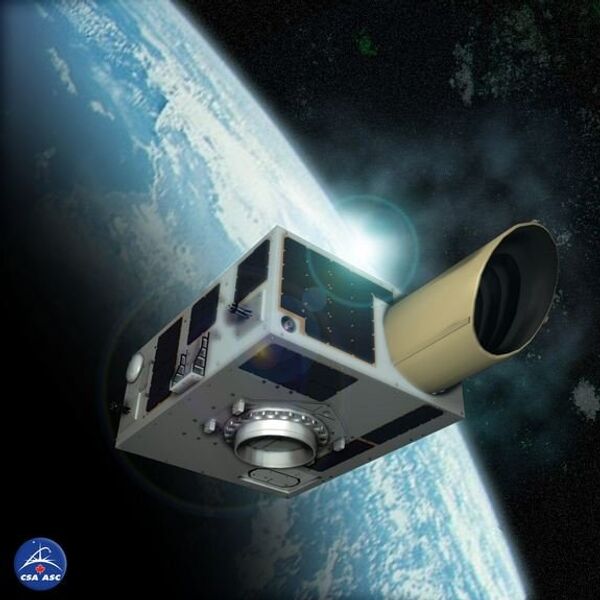 The Canadian Space Agency (CSA) on Monday launched a suitcase sized satellite into space aboard an Indian rocket that will search for large asteroids that could impact Earth and keep track of space junk in the solar system.

February 25 (RIA Novosti) - The Canadian Space Agency (CSA) on Monday launched a suitcase sized satellite into space aboard an Indian rocket that will search for large asteroids that could impact Earth and keep track of space junk in the solar system.

“The project with the CSA is essentially to survey the sky and get the best, improved near-Earth asteroid population and the ones that can sometimes cross Earth orbit,” said Denis Laurin, a CSA space astronomy program scientist, according to the website space.com.

The CSA Near-Earth Object Surveillance Satellite (NEOSSat) was one of seven satellites on board the Indian Polar Satellite Launch Vehicle which blasted off at 7:31 a.m. EST (1231 GMT) Monday from the Satish Dhawan Space Centre in Sriharikota, India.

The NEOSSat is the world’s first microsatellite “designed to detect and track space objects, debris and satellites,” according to a statement by the CSA.

“As NEOSSat becomes fully operational, the satellite will provide us with key data and imagery from the unique vantage point of space to become our Sentinel in the Sky,” said Gilles Leclerc, Acting CSA president in the statement.

The $25 million satellite will orbit the globe every 100 minutes looking for asteroids that could threaten the planet.

It is designed to look for large asteroids, according to space.com, and isn’t capable of catching relatively small space rocks like the 50-foot (15-meter) Russian meteorite that exploded over the Russian city of Chelyabinsk on Feb. 15 injuring over 1,500 people and damaging thousands of buildings.

Since NEOSSat is a space-based telescope, it will be able to search for asteroids during both daylight and night, which differs from most ground-based asteroid telescopes, which depend on the night sky, space.com reported.

Canada also launched its first military satellite, “The Sapphire,” on board the Indian rocket Monday. The Canadian Department of Defence said it is designed to increase Canada’s ability to protect its “assets and interests” in space, CTV News reported.

Also launched into orbit by the Indian rocket Monday was a French-built satellite that will study the world’s oceans.