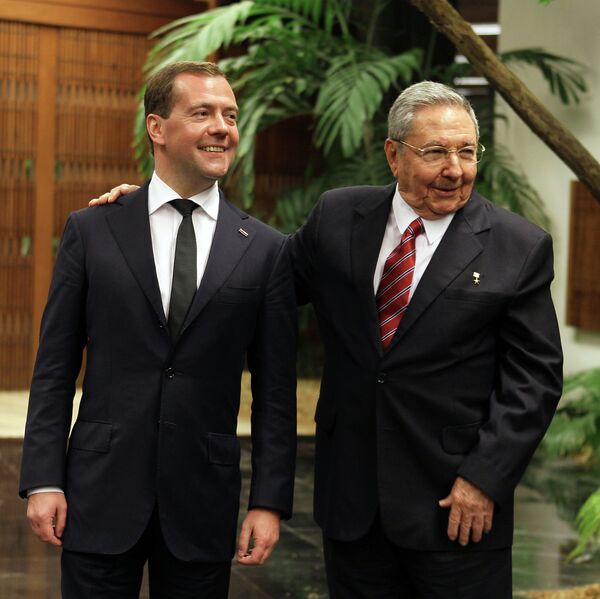 “I had an informal meeting overnight with Commander Fidel Castro. Such meetings are always informal; this is my second meeting of its kind, the first one was in 2008,” Medvedev told Cuban journalists.

He said the 86-year-old Cuban revolutionary leader was "in good health."

“We discussed various issues, including Cuba's economic development, international problems, we have touched upon different subjects, even such extraordinary events as the meteor blast above Russia or shale gas problems,” the Russian premier said. “It was very interesting for me to talk to Fidel, to hear his opinions on what is going on.”

Medvedev also met with Cuban leader Raul Castro to discuss all aspects of cooperation between the two states.

“So far, there is not a single problem marring our relations, on the contrary, we move forward in all aspects,” Medvedev said.

The sides signed about a dozen various cooperation agreements after the talks.

Apart from energy deals, some of which have already been implemented, Russia and Cuba agreed on projects in the high tech, medicine and space spheres.

“The trade turnover is not as big as it should be between Russia and Cuba, $200 million is not very much,” Medvedev said, adding that he was sure that it will grow over time.

“Our relations with Latin American and Caribbean states are not circumstantial… We just think that here we have many friends, and we work to have full-fledged cooperation with them. It’s a booming region, with good economic opportunities, but, at the same time, plagued by problems that we can solve together. That’s why it’s the zone of our strategic partnership interest,” Medvedev said.

He added that Cuba “is dear to the heart of every Russian.” Last year, about 90,000 Russian tourists visited Cuba, the premier said, and “they feel comfortable here.”