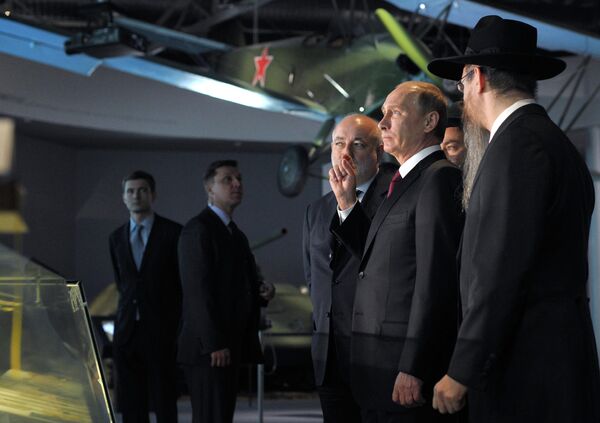 © RIA Novosti . Alexei Druzhinin
/
Go to the mediabank
Subscribe
International
India
Africa
Russian President Vladimir Putin on Tuesday suggested moving a collection of Jewish religious texts from the archive of Moscow’s Lenin Library to the building of the Jewish Museum and Tolerance Center in Moscow.

MOSCOW, February 19 (RIA Novosti) - Russian President Vladimir Putin on Tuesday suggested moving a collection of Jewish religious texts from the archive of Moscow’s Lenin Library to the building of the Jewish Museum and Tolerance Center in Moscow.

Since 1991, leaders of a Brooklyn-based Orthodox Jewish movement have been trying to regain possession of the so-called Schneerson Library, one of the main Jewish religious relics.

“We might think this over, I’m ready to draft relevant instructions for the government, so that this library could be placed on the center’s premises,” the president said at a meeting of the Presidential Council for Interethnic Relations held in the Jewish Museum.

He added that all visitors should get full access to the rare books and manuscripts. Such move will benefit all those people who show true interest in those sacred Jewish objects, the president said.

“In my opinion, it’s a serious step forward for people who really want to solve this issue, not to use it as a pretext for fuelling tensions, for confrontation,” Putin said.

A member of the Jewish center’s board of trustees, tycoon Viktor Vekselberg, said the center was ready to accept and house the collection.

The Schneerson Library is a collection of books and religious manuscripts assembled by the Chabad-Lubavitch Hasidic movement in Belarus over two centuries prior to World War II.

Putin said that, according to the law, the library does not belong to any religious group and is property of the Russian state. From the legal point of view, the library consists of two parts. The first part was nationalized by the Soviet government after the 1917 revolution, while the second, containing about 25,000 pages of manuscripts, was taken out of the Soviet Union by its owner, fell into the hands of the Nazis and was later seized by the Red Army as a war trophy.

The president said the return of cultural valuables confiscated after the revolution might set a dangerous precedent and “open a Pandora's box” of other, similar property claims.

In January, a US court imposed a $50,000 a day fine on Russia for failing to comply with an earlier order to hand over religious texts from the Schneerson collection to the US Hasidic community.