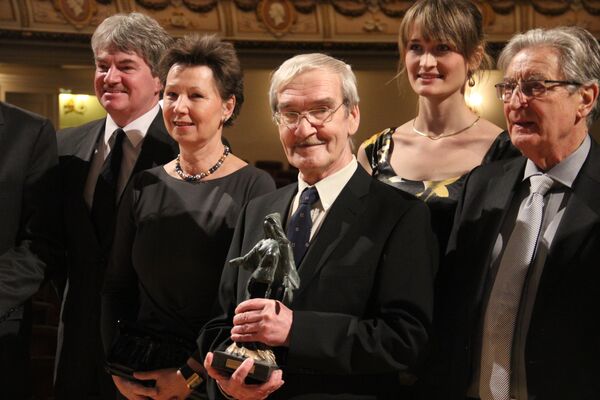 © RIA Novosti . Sergej Pirogov
Subscribe
International
India
Africa
A retired Soviet lieutenant colonel whose self-control prevented a nuclear war from being triggered by a long-classified accident in 1983 was honored with a German anti-war prize on Sunday.

DRESDEN, February 17 (RIA Novosti) – A retired Soviet lieutenant colonel whose self-control prevented a nuclear war from being triggered by a long-classified accident in 1983 was honored with a German anti-war prize on Sunday.

Stanislav Petrov, 73, won the fourth Dresden-Preis (Dresden Prize), which comes complete with a check for 25,000 euro ($33,000). The awarding ceremony, which marks the anniversary of the Dresden bombing in 1945, was held in the Dresden Opera Theatre (the Semperoper).

One of the organizers, Director General of Friends of Dresden Deutschland, Heidrun Hannusch, said Petrov had "averted a third world war" and his heroic deed will go down in history as one of the most significant events of the past few decades that contributed to the preservation of peace.

Petrov has stubbornly denied all attempts to label him a hero. “I did nothing heroic, I don’t feel like a hero. I just did my job and I like the way I did it,” Petrov told the audience.

Ironically for a military officer, Petrov shot to fame for ignoring his direct responsibilities. The officer served at a command center of the Soviet nuclear early-warning system outside Moscow, which reported the launch of five nuclear missiles from US territory on Sept. 26, 1983.

Cold War tensions were riding high at the time, boosted by the Soviet Union’s fears about the US Strategic Defense Initiative – “the Star Wars program” – and the international incident caused by the Soviet air defense shooting down a Korean passenger plane earlier in September that year.

Petrov’s duty was to report the incoming missiles to his superiors, who were likely to order a snap retaliatory strike. However, he chose to ignore the report, ruling it an equipment malfunction and reckoning five missiles insufficient for a proper war.

His guess was right: an investigation proved the warning to be a false report by a monitoring satellite confused by sunlight reflecting off high-altitude clouds.

Petrov was neither promoted nor disciplined and continued his service, while the story remained classified until 1998. He later said he was denied an award because the incident was investigated by the officers responsible for the malfunction.

The annual Dresden-Preis was incepted in 2010 and is awarded for anti-war effort. Recipients include the last Soviet leader, Mikhail Gorbachev, pianist Daniel Barenboim, active in promoting Israeli-Palestinian reconciliation, and US war photographer James Nachtwey.

This is the third award Petrov received after the story was made public. In 2006, Petrov was the recipient of the World Citizen Award and six years later he was given the prestigious international award Deutscher Medienpreis.