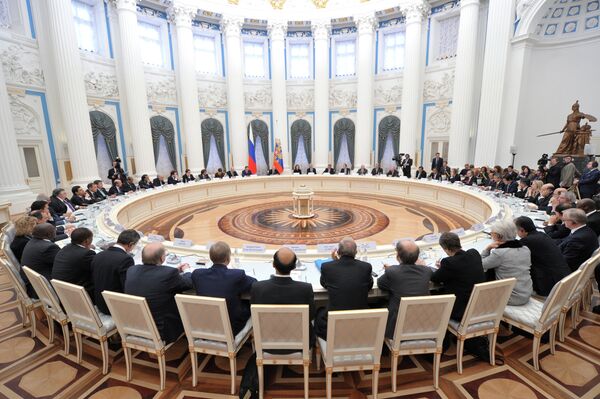 The Group of 20 finance chiefs pledged on Saturday to refrain from competitive devaluation and targeting exchange rates for competitive purposes.

"We will refrain from competitive devaluation. We will not target our exchange rates for competitive purposes, will resist all forms of protectionism and keep our markets open," said the communiqué issued after two-day talks of G20 finance ministers and central bankers in Moscow.

The G20 finance chiefs also reaffirmed their commitment “to cooperate for achieving a lasting reduction in global imbalances” and “to move more rapidly toward mores market-determined exchange rate systems and exchange rate flexibility.”

"We reiterate that excess volatility of financial flows and disorderly movements in exchange rates have adverse implications for economic and financial stability,” the communiqué said.

Russian Finance Minister Anton Siluanov said earlier on Saturday that countries pursuing a monetary policy that hinges on weakening the national currency in the hope of catalyzing economic recovery would be wise to remember the associated risks.

Earlier this week G7 countries vowed not to use fiscal and monetary policies to influence national currencies' exchange rates. That calmed fears of "currency wars" that had grown as the new Japanese government sought to win new economic impetus through a looser monetary policy and weakened yen.

"Thanks to the important policy actions in Europe, the U.S., Japan and the resilience of the Chinese economy, tail risks to the global economy have receded and financial market conditions have improved. However, we recognize that important risks remain and global growth is still too weak, with unemployment remaining unacceptably high in many countries,” the communiqué said.

"Under these circumstances, a sustained effort is required to continue building a stronger economic and monetary union in the euro area and to resolve uncertainties related to the fiscal situation in the United States and Japan, as well as to boost domestic sources of growth in surplus economies, taking into account special circumstances of large commodity producers," the communiqué said.

The communiqué also contained a commitment “to build a more resilient financial system” and to “develop credible medium-term fiscal strategies” by the summit of G20 leaders to be held in St. Petersburg on September 5-6, 2013.

Russia assumed the rotating G20 presidency for the first time on December 1, 2012.

The Group of Twenty (G20) brings together developed and emerging economies that together account for approximately 90 percent of the global economy.