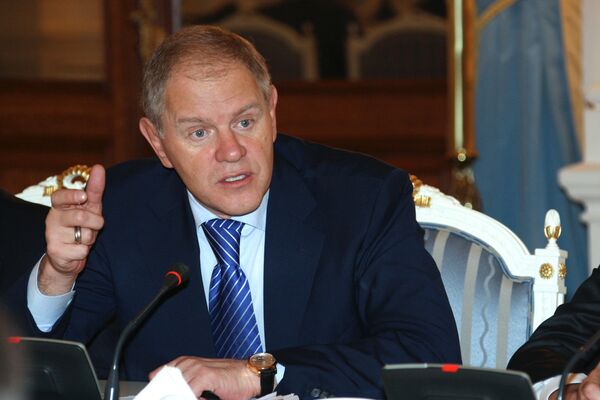 Russian investigators have opened a criminal probe into a high-level official in charge of overseeing the country’s lucrative fishing sector, who is suspected of forging documents to protect a subordinate charged with accepting nearly $900,000 in bribes, an Investigative Committee spokesman said Friday.

MOSCOW, February 15 (RIA Novosti) – Russian investigators have opened a criminal probe into a high-level official in charge of overseeing the country’s lucrative fishing sector, who is suspected of forging documents to protect a subordinate charged with accepting nearly $900,000 in bribes, an Investigative Committee spokesman said Friday.

The move seems to fit with the Kremlin’s rhetoric of fighting corruption among Russian officials; however, initial reports made it seem unlikely that the punishment meted out to the fisheries boss would be harsh.

Andrei Krainy, head of Russia’s Federal Fisheries Agency (Rosrybolovstvo), faces forgery charges after investigators found he had backdated the dismissal of an underling in order to mitigate the potential punishment for the man's alleged corruption, investigators said.

The subordinate, Sergei Muravyov, who headed the Northwest Territorial Administration of Rosrybolovstvo, was detained in May 2011 as he accepted a 5 million ruble ($166,000) bribe.

Muravyov has been charged with large-scale bribe-taking, abuse of power and forgery. Investigators said he received 26 million rubles ($863,000) in bribes for hiring staff without experience and skills in the area of fishing control.

Investigators found that Krayniy “acted out of his personal interest” when he fired Muravyov post factum, just two days before the latter was detained, so that Muravyov’s actions could be qualified as fraud, which is a less serious crime than bribery, Vladimir Markin of the Investigative Committee said.

Meanwhile, Krayniy said in an interview with the Izvestia newspaper published on Friday: “I have nothing to be afraid of, I have violated no law. Such checks are always being conducted. There are often criminal cases and questionings that end in nothing.”

Political analyst Stanislav Belkovsky has linked the latest investigation against Krayniy to a turf war for his high post.

“This criminal case will be developing. Evidently, the investigation is linked to a struggle for the post of Rosrybolovstvo director, and to some degree bespeaks Krainy’s dismissal. But this issue is on the table and it will be decided at the last moment by the president himself,” Belkovsky said.

Krayniy, 54, was appointed head of Rosrybolovstvo in May 2007. Since then, Rosrybolovstvo changed its legal status twice, becoming a state committee for fishery in October 2007 and a federal agency in May 2008.

In 2010, Russia's Federal Fisheries Agency announced plans to introduce new regulations on sport and recreational fishing and to impose restrictions on the permissible catch. The plans caused discontent in Russia. Late last year, Prime Minister Dmitry Medvedev assured that fishing will remain free for all Russians.