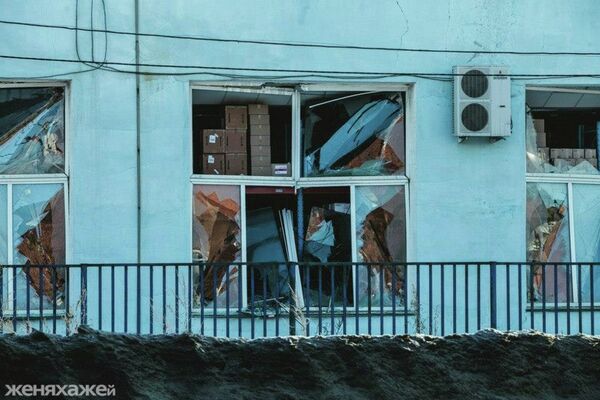 A hail of meteorite fragments fell in central Russia on Friday morning, hurting hundreds of people and damaging thousands of buildings, according to officials.

MOSCOW, February 15 (RIA Novosti) – A hail of meteorite fragments fell in central Russia on Friday morning, hurting hundreds of people and damaging thousands of buildings, according to officials.

As of late afternoon, around 1,200 people had been hurt, including more than 200 children, mostly in the Chelyabinsk Region, the Interior Ministry said. Figures on hospitalization in the region varied significantly, from 34 to 112, with two people reported to be in "grave" condition.

The majority of those hurt had suffered cuts from broken glass, but the region's governor said two-thirds of the injuries were very light.

President Vladimir Putin ordered emergencies officials to provide "immediate" assistance to people affected by the meteorite. Officials said gas supplies were cut off to hundreds of homes in the Chelyabinsk Region as a safety precaution. Some 3,000 residential buildings were also damaged, Chelyabinsk city administration officials said. An estimated 20,000 emergency response workers have been mobilized.

Background radiation levels reportedly remain unchanged. This was confirmed both by emergencies officials, and by the national nuclear agency, concerned because the area has a fair number of nuclear facilities.

Reports about whether this was one large meteorite or many smaller ones initially varied, but the national space agency, Roscosmos, confirmed by early afternoon that the object had been a single meteorite, a report given earlier by emergency officials.

“Verified information indicates that this was one meteorite which burned up as it approached Earth and disintegrated into smaller pieces,” deputy head of the Russian Emergencies Ministry press office, Elena Smirnykh, said.

Roscosmos stated the meteorite had been moving at a speed of 30 kilometers (18.6 miles) per second.

"All the city's residents saw blinding flashes, very bright ones," a teacher in the Chelyabinsk Region told RIA Novosti. "Suddenly, it was very, very horribly bright. Not like the lights got turned on, but as if everything was illuminated with unusual white light."

Officials are trying to determine where the fragments have landed.

The Chelyabinsk governor said one had fallen in a lake in his region, while others have been reported in the Tyumen, Kurgan and Sverdlovsk regions as well. Police said an eight-meter wide crater had been discovered near the Chelyabinsk lake. Radiation levels around the crater were reported to be normal.

Early in the day, emergency officials in neighboring Kazakhstan said they were searching for two unidentified objects that reportedly fell in the country's Aktobe region. But no meteorite fragments had been found by Friday evening, local time, leading to speculation that if meteors had entered the Earth's atmosphere over the Central Asian country they had been vaporized before making impact.

The European Space Agency (ESA) said there was no link between the meteorite and the 2012 DA14 asteroid which is due to pass close by the Earth later on Friday. NASA also said there was no connection because the asteriod and the "Russian meteorite" are on "very different paths."

Russian Prime Minister Dmitry Medvedev, speaking at an economic forum going on in Siberia's Krasnoyarsk region, called the meteorite “a symbol of the forum.”

“I hope that there will be no serious consequences, but it is a demonstration that it is not only the economy that is vulnerable, but our planet as well,” he said.