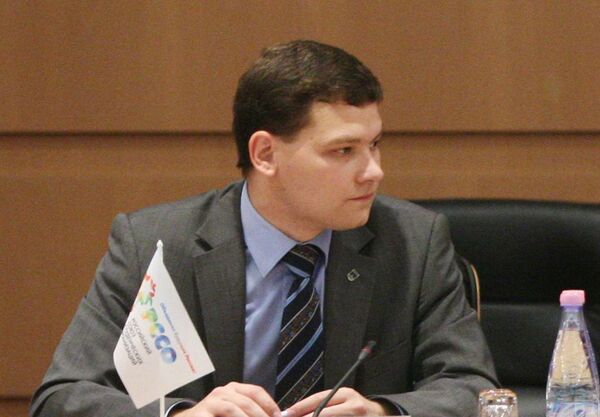 The Russian academic authorities on Friday revoked the doctoral degrees of 11 people accused of plagiarizing their dissertations, in what it said was the first step in a crackdown on an alleged network cranking out fake PhDs.

MOSCOW, February 15 (RIA Novosti) – The Russian academic authorities on Friday revoked the doctoral degrees of 11 people accused of plagiarizing their dissertations, in what it said was the first step in a crackdown on an alleged network cranking out fake PhDs.

All 11 PhD holders stripped of titles by the Higher Attestation Commission – including Andrei Andriyanov, 30, a member of the ruling United Russia party – defended their dissertations at the Moscow State Pedagogic University.

The scandal broke out after Andriyanov – who holds a PhD in history – was appointed last March to head the Kolmogorov School, an elite Moscow mathematical school.

Bloggers, who accused Andriyanov of securing the job through his connections, rather than his qualifications, examined his dissertation and reported numerous violations of PhD requirements and plagiarism.

A hastily convened state commission checked a sample of 25 dissertations defended at the Moscow State Pedagogic University in 2007-2012, including Andriyanov’s, and found violations and plagiarism in 24 of them.

“It looks like a commercial network producing fraudulent…dissertations in history,” Ivan Kurilla, a Volgograd-based historian involved in the blogger check of the dissertations, wrote on the Livejournal network in November.

Andriyanov denied the allegations, but resigned from the Kolmogorov School in early February.

Friday’s decision has now to be approved by the Education and Science Ministry. One of the 11 ex-doctors, Daniar Batrashev, who works in the ombudsman’s office in the southern Astrakhan Region, told RIA Novosti on Friday he will fix the mistakes in his dissertation and defend it again.

Other holders of fake doctorates could find themselves stripped of their qualifications soon.

“We will continue this work, we’ve got a dozen such dissertations lined up,” Vladimir Filippov, the head of the Higher Attestation Commission, said on Friday.

The commission is tasked with of monitoring all dissertations defended in Russia, but its task is insurmountable because there are just too many of them, Deputy Education and Science Minister Igor Fedyukin said last week.

About 26,000 dissertations were defended in Russia in 2011, the latest year for which statistics are available, with only about 150 of them refused approval by the commission, Fedyukin said.

Russia’s higher education system has gained a reputation for being riddled with corruption. A deputy head of the Faculty of World Politics at the Moscow State University was caught in October accepting a bribe of 1 million rubles ($33,000) from a prospective postgraduate student. An investigation into that case is ongoing.

The Higher Attestation Commission was itself involved in a scandal, after its former head Felix Shamkhalov was arrested earlier this month accused of embezzling 1.5 billion rubles ($50 million) from state-owned Vneshekonombank via real estate fraud.

Investigators said Shamkhalov’s case, which could see him jailed for up to 10 years, is not related to the crackdown on the alleged fake PhD network.