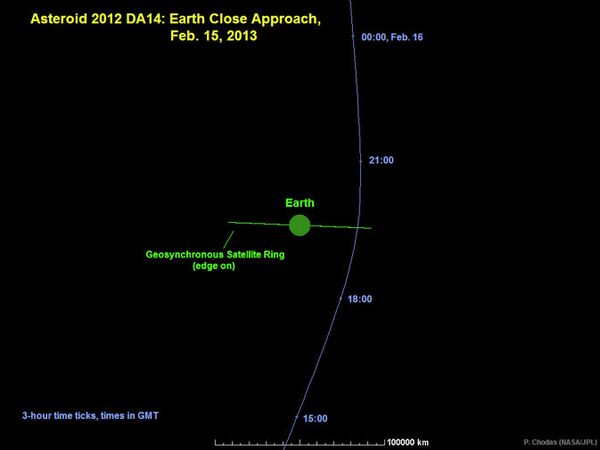 © NASA
Subscribe
The massive 2012 DA14 asteroid came closest to the Earth late on Friday and is how heading away from the planet, Russian astronomers said on Friday.

MOSCOW, February 15 (RIA Novosti) - The massive 2012 DA14 asteroid came closest to the Earth late on Friday and is how heading away from the planet, Russian astronomers said on Friday.

The asteroid, the size of a 15-storey building, reached its closes point to the Earth at 23:25 on Friday, approaching the planet at the distance of 27,700 km, closer than communication and weather satellites.

“Currently, from the point of view of an observer in the center of European Russia, it can be found on the southeastern part of the sky, in the Virgo constellation, about eight degrees above the horizon,” said Leonid Yelenin, an astronomer of the Keldysh Institute of Applied Mathematics.

The flyby took place about 16 hours after a meteorite shower left some 1,200 people injured in the Urals city of Chelyabinsk.

The asteroid wasn’t visible to the naked eye, shining at its brightest with an apparent magnitude of about 7.0. A person with average eyesight can see celestial objects with brightness down to magnitude 6.

The 2012 DA14, which is roughly 50 meters (165 feet) in size and weighting about 130,000 metric tons, was first spotted by a team of Spanish astronomers at the La Sagra Sky Survey. Their calculations had demonstrated that the celestial body would fly close to the Earth in 2013, with a small possibility of impact.