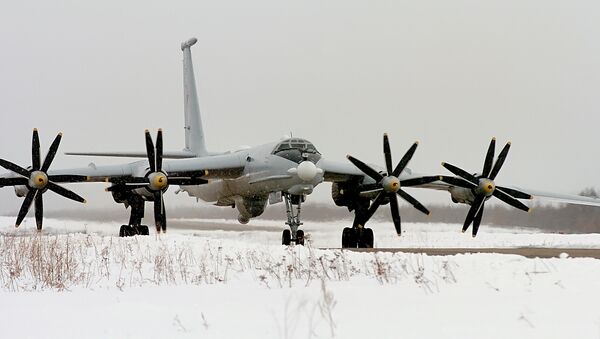 “So far this week, Northern Fleet aircrews have made three flights to the Arctic region,” he said.

Two flights were made by an Ilyushin Il-38 May maritime patrol and anti-submarine warfare (ASW) aircraft and one by a Tupolev Tu-142 Bear maritime reconnaissance and ASW aircraft, he said.

The ASW aircraft take off from fleet airbases in the Murmansk and Vologda regions and fly over international waters above the Arctic Ocean and along the Northern Sea Route, Serga said.

The Navy patrol aircraft monitor the pack-ice near the Northern Sea Route to assist navigation for civilian ships in Arctic regions, Serga said.

These patrols are in addition to strategic bomber patrol flights which Russia resumed over the Pacific, Atlantic and Arctic oceans in August 2007. According to the Defense Ministry, Tu-95 and Tu-160 strategic bombers fly an average of 50 such patrol missions every year.

Russia has officially set the goal of deploying a combined-arms force including military, border, and coast guard units by 2020, to protect its political and economic interests in the Arctic and boost Russia’s military security.

The Russian authorities have recently been calling for tighter security along the country’s Arctic frontiers as rapid pack-ice loss is making the region more accessible to maritime traffic.

Russian Deputy Prime Minister Dmitry Rogozin said in December 2012 that Russia risks losing its sovereignty by the mid-21st century if it does not assert its national interests in the Arctic today.

According to the US National Snow and Ice Data Center, in late 2012 the area covered by Arctic ice shrank to its lowest since 1979.

“Climate change has increased the transport accessibility of the Arctic region. However, growing maritime traffic is likely to bring about more attempts at smuggling, illegal migration, drug trafficking… and other types of organized crime,” Yevgeny Lukyanov, a deputy secretary of the Russian Security Council, said at an international Arctic states conference in Norway’s Tromso.

“That’s why Russia needs to cooperate with other Arctic states in strengthening and defending its Arctic borders and in monitoring transportation routes,” Lukyanov added.

He denied Russia was pursuing military or geopolitical goals in the area.