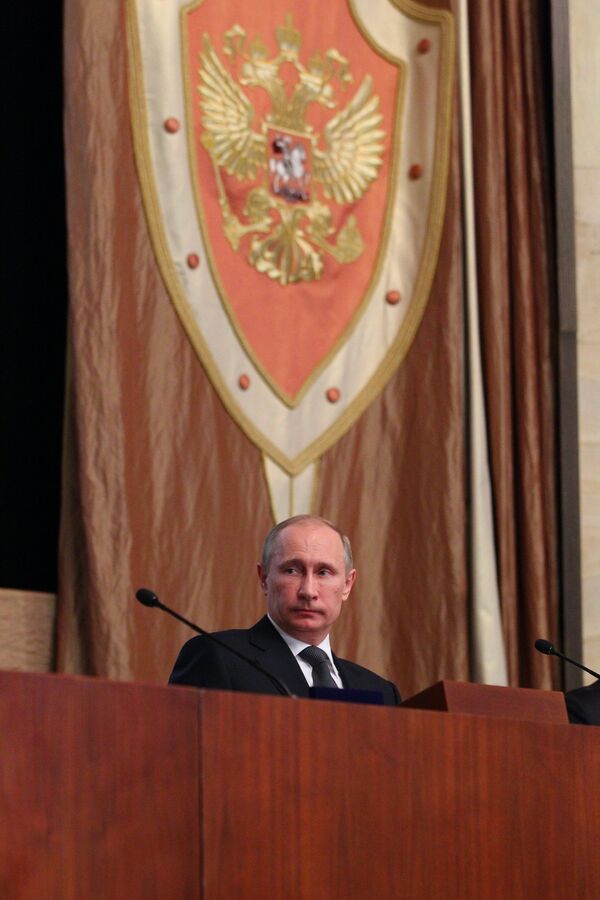 Nothing can stop or slow down the reintegration of the post-Soviet space, Russian President Vladimir Putin said on Thursday.

MOSCOW, February 14 (RIA Novosti) – Nothing can stop or slow down the reintegration of the post-Soviet space, Russian President Vladimir Putin said on Thursday.

“We’ve heard some recent nervous and outspoken remarks regarding integration in the post-Soviet space. Let’s put them down to the emotional rhetoric of these politicians,” Putin said at a meeting of FSB (Federal Security Service) officers.

“Close integration is an intrinsic global process,” he said, adding Russia could face attempts to stop work toward integration.

“Different forms of pressure, including mechanisms of so-called ‘soft power’ may be used here,” the president said calling for closer contacts with Belarus, Kazakhstan and other integration partners.

“Any direct or indirect interference in our domestic matters, any forms of pressure on Russia, our allies and partners is intolerable,” Putin said.

Belarus, Kazakhstan and Russia have since January 1, 2012, been part of a Common Economic Space (EEP), or Customs Union. The union allows free movement of capital, goods and services across the three states’ national borders. Kazakhstan's Central Asian neighbor Kyrgyzstan has applied to join.

Russia views this grouping as a precursor to a broader Eurasian Economic Union, and has even touted membership to Ukraine and Moldova, although Kiev has long harbored ambitions of moving closer to the EU.

In December 2012, then US Secretary of State Hillary Clinton criticized Russia’s post-Soviet integration initiative, in an address to the Organization for Security and Cooperation in Europe.

“It’s going to be called a Customs Union, it will be called Eurasian Union and all of that. But let’s make no mistake about it,” Clinton said, branding the move as “re-Sovietization.”

Putin on Thursday also criticized the attempts of non-governmental organizations (NGOs) financed from abroad to speak on behalf of Russian society.

“No one has the monopoly or right to speak on behalf of Russian society as a whole, most of all those structures governed and financed from abroad. We have outlined a precise system for NGO work in Russia,” Putin said referring to a controversial NGO law which came into force in November.

That law, obliging Russian non-governmental organizations (NGOs) financed from abroad and involved in political activity to register as “foreign agents,” has been criticized by Russian human rights organizations. They claim it is just one of a slew of Kremlin-backed laws aimed at suppressing opposition to Putin's rule.

Kremlin officials have repeatedly claimed Washington is using NGOs in Russia as a cover to bring about political change. Putin once famously branded Russian NGOs involved in politics as "jackals."