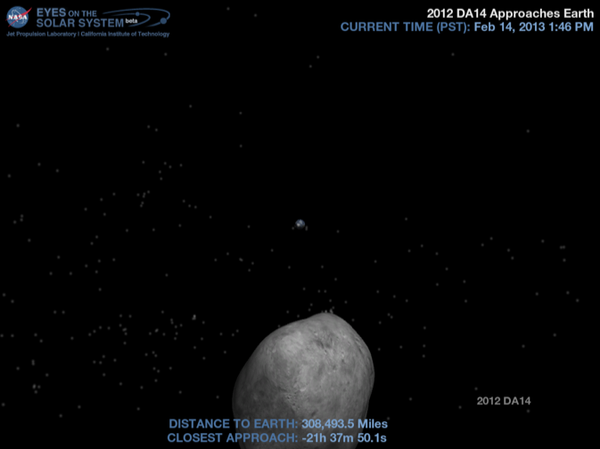 © NASA
Subscribe
International
India
Africa
An asteroid about the size of a 15-story building that will “narrowly” streak by the planet Earth on Friday ought to serve as a warning that a serious collision is ‘a matter of time,’ said former Apollo 9 astronaut Rusty Schweickart on Thursday.

WASHINGTON, February 15 (By Maria Young for RIA Novosti) An asteroid about the size of a 15-story building that will “narrowly” streak by the planet Earth on Friday ought to serve as a warning that a serious collision is ‘a matter of time,’ said former Apollo 9 astronaut Rusty Schweickart on Thursday.

The asteroid 2012 DA14, Schweickart said in an interview with RIA Novosti, “is a celestial torpedo shooting across our spaceship bow and it ought to get our attention, it should tell us this happens all the time.”

“We get hit on average every 300 years or so, and we don’t live that long, so we don’t think about it,” he said. “But there’s a million objects about 30 meters (98 feet) in diameter or larger that cross the earth’s orbit, and we’ve found less than one percent of them, so a significant collision is just a matter of time.”

Officials at the National Aeronautics and Space Administration (NASA) don’t see it that way.

“NASA monitors these kinds of objects all the time and there’s a lot of analysis about projecting orbits, it’s a very detailed science and we’ve become very good at that,” said NASA spokesman Steve Cole in an interview with RIA Novosti.

“With global telescopes scanning 24/7 you can see even small objects pretty far away, and once you have a lot of observations you can calculate the orbit forward and know where it’s going to be in the future,” he said.

“It’s not going to hit the Earth,” said Cole.

That is closer than some man-made satellites orbiting the earth at about 22,000 miles (35,406 kilometers).

It will be the closest approach by a “killer” space rock in more than a century, roughly the same size as an asteroid that hit Siberia in 1908 and leveled trees over 825 square miles (2,137 square km).

Asteroids have been the subject of popular movies like “Deep Impact” and “Armageddon,” that fuel public concerns that may not be so far off-base.

“There are many, many, many more objects out there that need to be found,” said Schweickart.

He and another former astronaut, Ed Lu, founded the B612 Foundation to hunt for asteroids. In cooperation with NASA they are working to launch an infrared telescope into the orbit of Venus that will locate asteroids that haven’t been identified yet so that scientists can track their paths and alter those paths if needed.

Moving an asteroid, he said, is “simple. You run into it. You steer the spacecraft into it, and that changes its orbit slightly, so you increase or decrease its speed and that will make it either too early or too late for the collision.”

It relies on technology that’s already been developed. But what sounds so simple is really a 20-year process he admits, and it relies first on finding the asteroids.

His is one of at least half a dozen private ventures that are helping to propel space exploration, and in particular, the tracking of asteroids.

“As individuals we shouldn’t worry because your chances of getting hit by an asteroid are not very good. You have a much better chance of getting hit by lightning or winning the lottery,” Humberto Campins, a professor of physics and astronomy at the University of Florida, said in an interview with RIA Global.

“But as a civilization we should worry because sooner or later a large one that could cause global damage is going to hit,” he said.

Campins is part of NASA’s OSIRIS-Rex mission which is scheduled to launch a spacecraft to an asteroid in 2016.

It’s a research mission that could help scientists learn how to tap into the resources asteroids have, including water and other materials.

Valuable information, said Schweickart, but more needs to be done to help the planet Earth avoid what he sees as an inevitable collision.

“NASA has always and will always play down the potential for impact, that’s just the nature of a government entity,” he said. “But it’s a shooting gallery out there, and if we do our work we can save lives.”