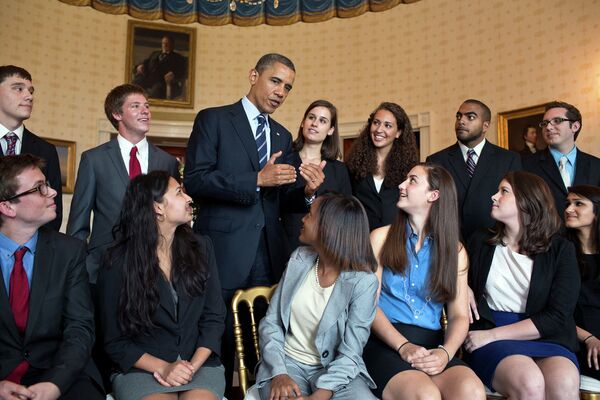 © Flickr / Pete Souza
Subscribe
The White House on Wednesday launched a “College Scorecard” designed to help Americans determine which institutes of higher learning provide the best return on an investment in education.

WASHINGTON, February 13 (RIA Novosti) – The White House on Wednesday launched a “College Scorecard” designed to help Americans determine which institutes of higher learning provide the best return on an investment in education.

“We know students and families are often overwhelmed in the college search process—but feel they lack the tools to sort through the information and decide which school is right for them,” US Secretary of Education Arne Duncan said in a statement Wednesday. “The College Scorecard provides a snapshot about an institution’s cost and value to help families make smart decisions about where to enroll.”

The initiative, which US President Barack Obama announced during his State of the Union speech Tuesday, ranks colleges on the basis of five categories: cost, graduation rate, student loan default rate, federal student loan burden, and employment rates for graduates.

“This is a form of consumer protection that helps students avoid schools that are performing poorly on a bunch of levels,” Andrew Kelly, a research fellow in education policy studies at the American Enterprise Institute, a conservative Washington-based think tank, told RIA Novosti on Wednesday.

The ranking allows students to see how a particular college or university compares to other similar institutions on the basis of specific criteria, including degree and major, and size and location of the school.

“The goal was to put the information out there in ways that would help people put it in context,” Kelly added. “So if a school has an 80 percent graduation rate, is that good or not so good, compared to other schools like it?”

The scorecard also frames the average debt in terms of what a student’s monthly payment for education loans for a specific school would be, Kelly said.

The average annual tuition for a four-year degree in the United States is $30,804, according to US Department of Education figures.

A 2011 survey by the Pew Research Center, a Washington-based nonprofit research group, found that 57 percent of Americans feel colleges fail to provide students with a good value for the money spent, while 75 percent said college is too expensive.