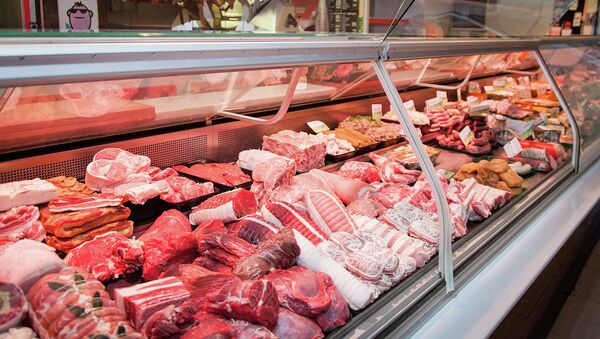 © Fotolia / Christophe Fouquin
Subscribe
International
India
Africa
Russia began a temporary ban on US beef and pork imports Monday over what it says is a failure by the US food safety watchdog to guarantee that these shipments are free of the feed additive ractopamine.

MOSCOW, February 11 (RIA Novosti) – Russia began a temporary ban on US beef and pork imports Monday over what it says is a failure by the US food safety watchdog to guarantee that these shipments are free of the feed additive ractopamine.

Russia’s federal food safety agency warned the United States, Canada, Mexico and Brazil in late 2012 that their meat imports could be halted should the shipments contain the additive.

Animal rights groups have said that ractopamine, which is used to stimulate livestock growth and make meat leaner, is prohibited in about 160 countries, including the European Union and the member states of the Customs Union of Russia, Belarus and Kazakhstan.

The US government and the country's meat industry lobby groups insist that ractopamine is safe at acceptable levels established by the international community, including the United Nations’ main food safety body.

US meat exporters likewise say the ban will mean huge financial losses. A spokesman for the US Meat Export Federation said Friday that the United States had exported about $280 million worth of pork and about $305 million worth of beef to Russia in the first 11 months of 2012, Bloomberg reported. The agency also said the trade group plans to send a delegation to Russia this week to search for a "compromise."

A spokeswoman for the US White House’s chief trade adviser said earlier that the United States was “deeply concerned” by Russia’s decision to ban US beef and pork imports containing ractopamine, a move Washington believed could hurt bilateral ties.

“These actions threaten to undermine our bilateral trade relationship,” said Andrea Mead, a spokeswoman for the office of US Trade Representative (USTR) Ron Kirk.

The dispute comes at a time of increasingly strained relations between the United States and Russia over human rights and international adoptions.

Washington angered the Russian government last year by introducing the so-called Magnitsky Act, a law imposing sanctions against Russian officials suspected of human rights abuses. The law was named after Sergei Magnitsky, a whistleblowing lawyer who died in a Moscow jail in 2009.

Russia has denied that the meat ban is connected to the current friction in bilateral ties.

However, late Monday afternoon, the country's food safety watchdog, Rosselkhoznadzor, said the demand for ractopamine documenation from Brazil, Canada and Mexico could be withdrawn if inspections show that these nations' meat exports to Russia match the same criteria as exports to the European Union.

"We plan to cancel the requirement for additional documentation guaranteeing the absence of ractopamine for meat supplies from Canada, Mexico and Brazil in the near future," Rosselkhoznadzor spokesman Alexei Alekseyenko told the Prime news agency. "This will be done if we are sure their system works."

It was not immediately clear when the planned inspections would take place.

Updated with comments from Rosselkhoznadzor.