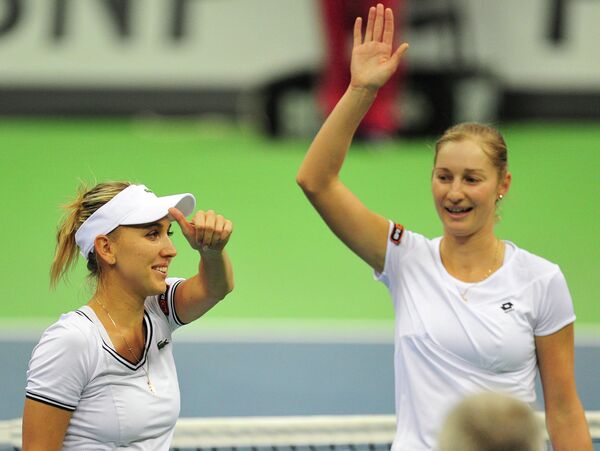 © RIA Novosti . Alexey Kudenko
/
Go to the mediabank
Subscribe
International
India
Africa
Russia beat Japan 3-2 in the quarterfinals of the Fed Cup on Sunday after bouncing back from 2-1 down.

MOSCOW, February 10 (R-Sport) - Russia beat Japan 3-2 in the quarterfinals of the Fed Cup on Sunday after bouncing back from 2-1 down.

"I think we played very confidently as a pair," Makarova said. "I'm very happy, a lot of emotions about the doubles, because we really played as a pair."

Russia faces Slovakia in April's semifinals after the Slovakians took an unassailable 3-1 lead over Serbia on Sunday.

Four-time champion Russia has lost a World Group first-round match only once since returning to the Fed Cup's top tier in 1997, the only blot a 2006 loss to the Belgium team of Justine Henin and Kim Clijsters.

In the final doubles rubber, the turning point in the first set came when Makarova and Vesnina broke the Japanese serve at 2-2 before going on to win the next four games and take the set.

The Russians had been broken in the first game, but recovered immediately to level the score, helped by poor Japanese serving as Doi and Morita landed just 52 percent of their first serves.

In the second set, Makarova and Vesnina showed the coordination born of regular doubles play together as they charged into a 4-1 lead before closing out the match.

"I think they need more time to play together in this team, and they will in the future," Japan captain Takeshi Murakami said of his doubles team. "I'm not disappointed, the Russian team is strong," he added.

Twentieth-ranked Makarova then took the match to the decisive doubles rubber with a 6-1, 6-1 demolition of the injury-troubled Date-Krumm.

"During the last two years, Ayumi and Kimiko have played singles," Japan captain Murakami said, explaining why he chose not to replace Date-Krumm with Doi in the singles. "I believe in [Date Krumm's] tennis."

In the doubles, Makarova replaced youngster Margarita Gasparyan, ranked 226th in the world, who had originally been slated to play the rubber.

Japan and Russia had never previously met in the Fed Cup.

Japan, which was playing its first World Group match for seven years, will now play a relegation playoff against a second-tier team in April.

Murakami said his aims for Japan's upcoming Fed Cup game were to develop the team's doubles ability and to bring through players to play singles, pointing to Date-Krumm's age.