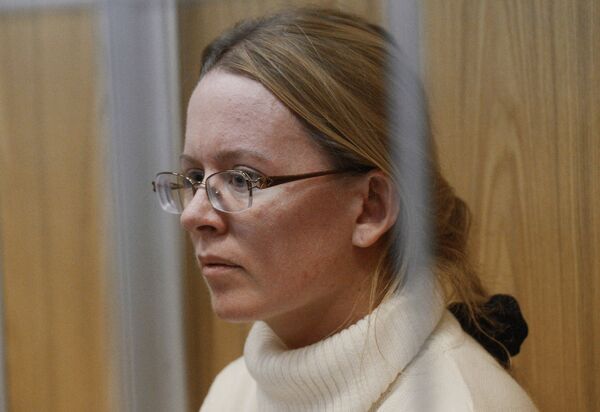 © RIA Novosti . Ilya Pitalev
/
Go to the photo bank
Subscribe
Yekaterina Smetanova, a suspect in a large-scale fraud at the Russian Defense Ministry, has been released from custody with travel restrictions after fully cooperating with investigation, Russia’s Investigative Committee said.

MOSCOW, February 5 (RIA Novosti) – Yekaterina Smetanova, a suspect in a large-scale fraud at the Russian Defense Ministry, has been released from custody with travel restrictions after fully cooperating with investigation, Russia’s Investigative Committee said.

Smetanova, a former executive at Oboronservis, a property management firm controlled by the Defense Ministry, was detained on fraud charges in October last year and signed a pretrial plea bargain agreement shortly after the arrest.

"Smetanova is abiding by her commitments under the agreement by cooperating with the investigators," spokesman for the Investigative committee, Vladimir Markin, said on Monday.

“She has pleaded guilty to the crimes of which she has been accused, and provided detailed and consistent testimony exposing the other individuals involved in the crime,” he said.

Markin also said that Smetanova had been put under state protection due to “potential threats to her life and health.”

The widely-publicized Oboronservis fraud case involves illegal sale of the defense ministry’s property with the damages from these deals adding up to about 4 billion rubles ($130 million).

The investigation, involving at least a dozen separate instances of fraud, led to the sacking of Defense Minister Anatoly Serdyukov in November.

Serdyukov has been summoned as a witness for questioning by investigators twice since then, although his status could change in the course of the probe, Markin said earlier.

Three other suspects have been arrested over the case, including the head of the ministry’s economic directorate Nikolai Ryabykh, the former head of the Defense Ministry’s property department Yevgenia Vasilyeva, and Smetanova’s husband Maxim Zakutailo.

According to the Investigative Committee, the court is now processing separate criminal cases against at least ten Defense Ministry officials as a single Oboronservis fraud case.