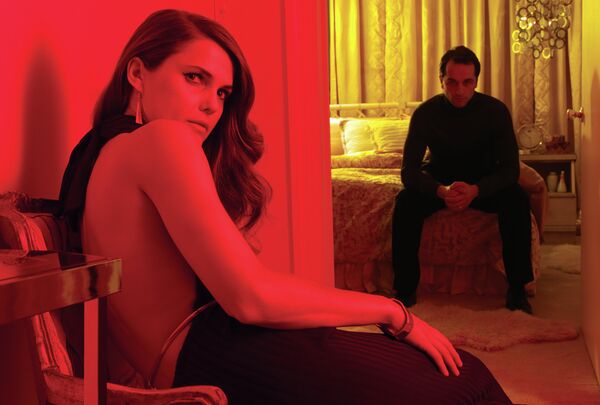 © Frank Ockenfels/FX
Subscribe
International
India
Africa
Meet Elizabeth and Philip Jennings, a 30-something couple raising two kids in a typical middle class home in the suburbs of Washington circa 1981. The “perfect” family, living the American dream, except for one little thing – Elizabeth and Philip are Soviet spies.

WASHINGTON, February 4 (By Stewart Kasloff for RIA Novosti) Meet Elizabeth and Philip Jennings, a 30-something couple raising two kids in a typical middle class home in the suburbs of Washington circa 1981. The “perfect” family, living the American dream, except for one little thing – Elizabeth and Philip are Soviet spies.

Welcome to “The Americans,” a new television series in the United States that premiered last week on the FX cable network and challenges some of the clichés of Hollywood’s relentlessly and uniformly negative depiction of Russians.

“It’s worth thinking about what ‘the enemy’ is. They’re still like any other American couple, dealing with the same issues while facing a more complicated life."

But Elizabeth (played by actress Keri Russell) and Philip (played by actor Matthew Rhys) aren’t just like any other American couple: they are KGB spies living in the United States during the height of the Cold War, willing to do just about anything in the name of their beloved Soviet Union, including kidnapping, murder, and sleeping with the “enemy.”

Cut to the early 1960s: Elizabeth and Philip are in the Soviet Union undergoing spy training separately, learning to completely lose their Russian accents. They are matched up by their KGB superiors to be husband and wife and shipped off to the United States to start a secret life together, have children and pretend to be ordinary citizens, but all the while living deep undercover as spies.

It is that ambiguous double life – stop-at-nothing Soviet spies yet devoted parents to their unmistakably American children, 13-year-old Paige and her little brother Henry – that forms the dramatic core of the series.

The Jennings’ children, growing up as normal American kids, are unaware of their parents’ secret lives, and Elizabeth and Philip are determined to keep it that way.

“It was the way that CIA officers and their families lived these clandestine lives,” Weisberg said. “That’s very real and it comes from my experience at the CIA. Young kids can’t keep a secret; they can’t go to school telling kids that mom and dad are spies. Then they get older and later you tell them and the kids feel they’ve been lied to and it’s very painful to hear that.”

Weisberg said the plotline of KGB spies living in the United States, raising American kids, was one of the main motivations for the series. “It was very emotional, that was the reason I wanted to write about a family.”

Rooting for the Spies

It is hard to watch “The Americans” and not in some way root for Elizabeth and Philip Jennings, maybe not to succeed in spying against the United States, but in trying to be good parents in often impossible circumstances.

“I just want to portray them as sympathetic because they’re heroes of the show. Imagine if they were CIA officers deep undercover in Russia, how would we feel about them?” Weisberg asked.

“I hope the audience will fall in love with the characters and then come to the realization ‘oh my God, I’m rooting for them doing things against the US government’,” Weisberg said.

“It might be a little different to believe and get used to, but we want you to root for the KGB,” said Executive Producer Joel Fields at the Television Critics Association (TCA) press tour in January.

But the show’s producers aren’t playing favorites; one of the central characters is a Federal Bureau of Investigation (FBI) counterintelligence officer living next door to the Jennings.

"There’s an FBI side of the story that’s told that when you’re with them, the hope is you’ll root for them too,” said Fields.

Nonetheless, the portrayal of Elizabeth and Philip Jennings as “likeable” Soviet spies is vastly different than the evil, ruthless and often comical depictions of Russians in decades of American movies and television shows.

“Whatever one might have thought of the Soviet regime, I don’t think anyone ever thought that everyone in the KGB was a horrible person,” Mark Stout, a former CIA analyst and current historian at the International Spy Museum in Washington, told RIA Novosti.

“Certainly some of them were. But most were good, normal, patriotic people, albeit pursuing a mistaken cause.”

Committed to the Cause

Elizabeth Jennings is unwavering in her commitment to the Soviet cause while raising her American children, careful not to let her kids know anything about her past life and love of all things Russian, despite how strongly she feels about her homeland.

In one scene from the premiere episode, Paige tells her mother about a school paper she has been assigned dealing with how the Russians “cheat” on arms control.  While obviously difficult to keep quiet, her mother says nothing, careful not to reveal her true feelings.

Weisberg said that scene was meant as a joke – “but a serious joke on how both sides inculcate their children. It was a deep character moment that her daughter is being taught something that is abhorrent to her, but her mother can’t say anything.”

In another scene Henry discusses a visiting American astronaut’s trip to the moon. Elizabeth, obviously reacting to the fact that the Soviets were beaten to the moon by the Americans can’t hold back this time, telling her son that “the moon isn’t everything. Just getting into space is a remarkable accomplishment” – a feat achieved by the Soviet Union before the United States.

While Elizabeth is fully indoctrinated into her life as a Soviet spy, her husband questions his life in espionage and is drawn to the freedoms and modern conveniences in the United States, which creates friction in their marriage.

“America’s not so bad,” Philip says. He marvels at air conditioning when he first arrives in the United States in 1965 and years later he says, “The electricity works all the time, the food is pretty great.”

Philip is tempted to turn himself over to the US authorities, become a double agent, collect millions of dollars from the US government and then establish a new and normal life in the United States with his family under new identities.

Elizabeth will have none of it. “I’m a KGB officer, I would go to jail, I would die, I would lose everything before I would betray my country.”
“The Soviet Union was a much poorer country. It was unthinkable for Soviets at the time to live a middle class American lifestyle, which is encouraging Philip to defect,” said Weisberg.

“The disparity in economic conditions is why the Americans won the Cold War. How that affects their marriage is one of the important themes of the show.”

Weisberg also said the show was inspired by the real-life story in 2010 of Anna Chapman and the Russian spy ring that was busted up while operating in the United States. He said he was surprised that the Russians were still spying on the United States in 2010 since according to Weisberg espionage at such a level is complicated, difficult and very expensive.

“This was something the Soviet intelligence services always did well, they were very adept at. There is still a lot of intelligence they want to collect,” Weisberg said.

But he realized his story couldn’t take place in 2010 or today, when for the most part – even though there have been recent cracks in the relationship between Russia and the United States – the two countries are not at each other’s throats like they were in 1981. “It’s not too interesting in the present day, but put it back in the Cold War when the stakes were higher back then,” Weisberg said.

And what about real-life Russian sleeper spies in present day America?

The Spy Museum’s Mark Stout said yes, “I think the Russians either have or are working on recreating an illegal capability in the US after their setback in 2010. I know they have illegals operating in other countries. There is every reason to believe that this sort of activity continues.”