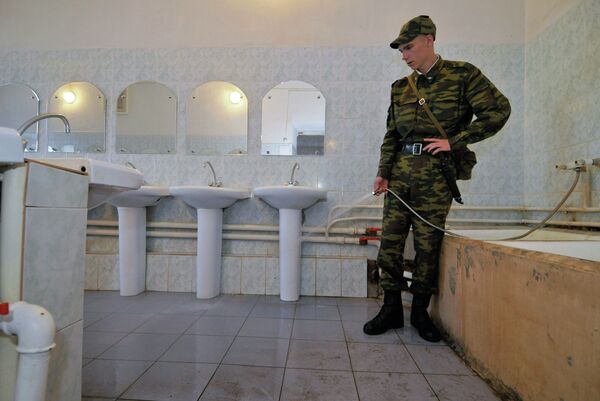 Russian soldiers will be able to trade in weekly trips to bathhouses for regular showers by year’s end, according to plans announced Monday by Russia’s defense chief.

MOSCOW, February 4 (RIA Novosti) – Russian soldiers will be able to trade in weekly trips to bathhouses for regular showers by year’s end, according to plans announced Monday by Russia’s defense chief.

“I’ve given instructions to set up shower rooms in all military units by the end of 2013,” Defense Minister Sergei Shoigu said during a teleconference at the General Staff’s Central Command, adding that “about 50,000 of them will have to be equipped.”

In mid-January, the head of Russia’s Federal Agency for Special Construction, Grigory Naginsky, announced plans to install showers in all the barracks of the country’s so-called military towns, saying these number about 500.

According to Naginsky, the Russian army now has a system in which “all week a soldier just washes his face and upper body [at a sink or basin], and then on Saturdays they all march in step to the bathhouse.” Now, he said, the goal is to create a more homely atmosphere: “Come back in the evening, take a shower, go to bed.”

The shower plans are the latest in a series of creature-comfort improvements the Defense Ministry has announced in recent weeks. In mid-January, Shoigu said he would rid the army of its antiquated “footwraps,” or portyanki, and a few days later the designer of Russia’s new army uniform said that the ear-flap hats traditionally worn in winter would be replaced with more modern headgear.