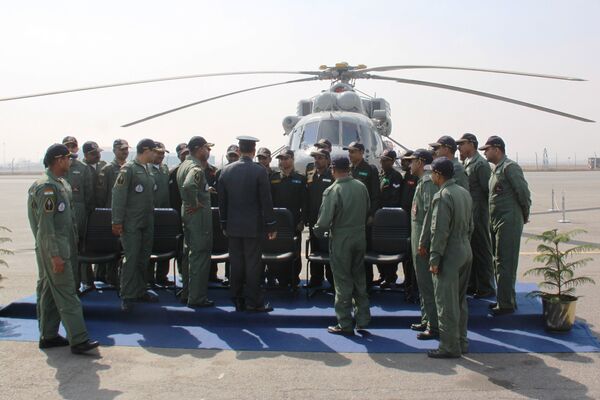 “The country [India] is one of the main importers of defense products on the global scale, and Russia continues to be one of its key suppliers,” Komardin, who heads the Russian delegation at the upcoming AERO INDIA 2013 international aerospace show, said in an exclusive interview with RIA Novosti on Monday.

Last year alone, Russia concluded more than $3.5 billion’s worth of new arms export agreements with India, including the purchase of 71 Mi-17B-5 Hip helicopters and the delivery of assembly kits for 42 Su-30MKI Flanker fighters, while the current portfolio of Indian contracts is worth more than $7 billion.

“We expect Rosoboronexport to annually ship at least $3 billion’s worth of weapons and material under the contracts that have already been signed with the Indian state clients,” Komardin said.

According to the official, prospective agreements in the area of military-technical cooperation could be even more lucrative for Russia.

“We are talking over plans to upgrade the country’s fleet of Ka-28 antisubmarine helicopters and Su-30MKIs, and to supply a batch of Mi-17V-5 to the Indian Interior Ministry. There are some other promising projects, too, and not just in aviation,” Komardin said.

At the same time, Russia is facing growing competition on the Indian arms market as New Delhi has been taking serious steps to diversify military imports over the past few years. At present, Russian weapons account for about 70 percent of all military hardware in service with the Indian Armed Forces.

Last year Russian arms exporters suffered two painful losses at Indian tenders. Russia did not win the contract to supply 22 helicopters to India, which preferred the US AH-64D Apache to Russia’s Mi-28N.

During the Medium Multi-Role Combat Aircraft (MMRCA) tender announced by the Indian Air Force to replace the aging MiG-21s, the Russian MiG-35 did not even make it to the finals, where the Eurofighter Typhoon twin-engine multirole fighter lost a contract worth at least $10 billion to France’s Dassault Rafale.

Komardin said that Russia must be ready to battle with foreign competitors over its share of the Indian arms market using advanced forms of military-technical cooperation.

“I would like to emphasize that we have abandoned the practice of simple selling, seeking more of joint programs to produce defense equipment, including for third parties. This gives us a chance to keep slightly ahead of our key rivals,” he said.

An example of such cooperation is the development of the Russian-Indian Multi-Role Military Transport Aircraft (MTA), which is expected to fly for the first time in 2017 and enter production both in Russia and India in 2019.

An agreement to set up a joint venture to develop and produce the plane was signed between India’s Hindustan Aeronautics (HAL) and Russia’s United Aircraft Corporation (UAC) in New Delhi in September 2010.

The AERO INDIA 2013 in Bangalore on February 6-11 will most likely see Russia making another attempt to promote its aircraft, including the Be-200 amphibious plane, on the Indian market. Russia also hopes to win the Indian tender for 197 scout and surveillance helicopters with its lightweight Ka-226T model.