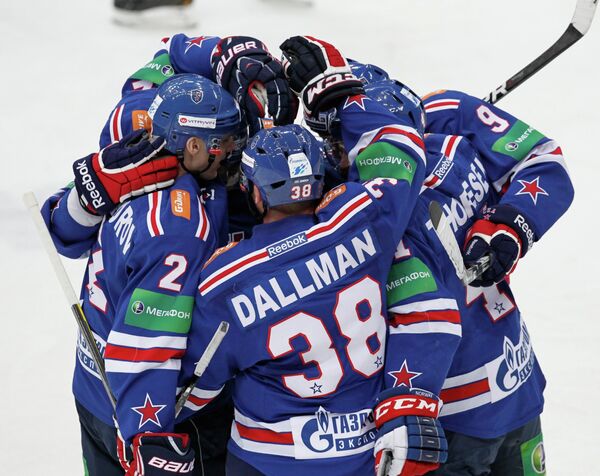 SKA became the first team from the Western Conference to be named regular season champion and will try to break the record of the Continental Cup holder never reaching the playoff final.

SKA forward Viktor Tikhonov opened the scoring in the middle of the first period, while former Los Angeles Kings defenseman Kevin Dallman doubled the lead on a power play on 36 minutes.

In the third period, Dynamo's Yuri Babenko narrowed the gap, but Czech forward Petr Prucha killed the visitors’ hopes of snatching points with another power play goal to bring SKA its third victory over Dynamo this season.

Dynamo now needs only one point from the last three games to clinch the third place in the West.

Elsewhere, Severstal Cherepovets grabbed a 5-2 win over visitors Metallurg Magnitogorsk to make sure of a playoff spot.

Severstal put severe pressure on Metallurg’s goal from the very start, netting three goals in the first period, before Mikhail Anisin made it 4-0 with his second goal for his new team Severstal.

Metallurg scored twice at the end of the second period as they tried to claw their way back, but Bogdan Kiselevich sealed Severstal’s victory with a slapshot.

Metallurg suffered its fifth consecutive defeat and stays fourth in the Eastern Conference.

In a Moscow derby, CSKA grabbed a 4-2 victory over Spartak to consolidate its second position in the West.

Neftekhimik Nizhnekamsk closed in on the last playoff berth in the Eastern Conference with 4-1 thrashing of Torpedo Nizhny Novgorod.

Neftekhimik is eighth, four points ahead of ninth-placed Yugra Khanty-Mansiysk, while Torpedo has only theoretical chances of making the postseason in 11th.

In other games, already-qualified Slovan Bratislava thrashed Vityaz Chekhov 3-0, while Atlant Moscow Region, 10th in the West, continued its struggle for the playoff spot with a sixth consecutive win, this time 5-2 over Lokomotiv Yaroslavl.