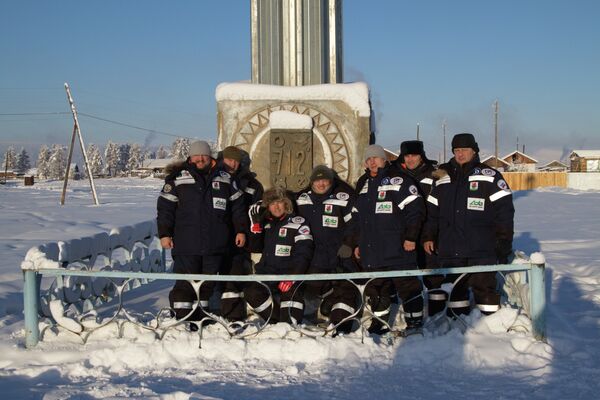 © Photo : Russian geographical society
Subscribe
A Russian research expedition performed a record-breaking first dive on Friday at one of the world’s coldest lakes in Siberia, reputed to be home to a monster.

MOSCOW, February 1 (RIA Novosti) – A Russian research expedition performed a record-breaking first dive on Friday at one of the world’s coldest lakes in Siberia, reputed to be home to a monster.

The head of the Russian Geographical Society’s underwater team, Dmitry Shiller, dived to the bed of Lake Labynkyr near the Sakha Republic’s village of Oymyakon, one of the coldest lakes in the world.

“The dive is expected to be listed in the Guinness Book of Records” as the first-ever in the one of the world’s coldest lakes, project manager Tatyana Nefyodova told RIA Novosti on Friday.

Prior to this week’s expedition, the lake had only been explored remotely with an echo-sounder and a probe, “which brought more questions than answers,” Nefyodova said.

The expedition might help to cast light on an old legend, claiming Labynkyr is home to a water-monster dubbed “the devil” by the locals and “Russia’s Loch Ness Monster” in the media.

Sonar equipment has managed to track unusually large objects in the lake, but scientists said they could not determine what they were.

Oymyakon is known in Russia as the "Pole of Cold", with average January temperature falls to below minus 50 degrees Celsius (-58 Fahrenheit). Home to around 500 people, it is the coldest permanently inhabited settlement in the world.

The other Siberian settlement vying for the "Pole of Cold" title is the small town of Verkhoyansk, where average January temperatures drop to minus 48 degrees Celsius (-54.4 Fahrenheit).