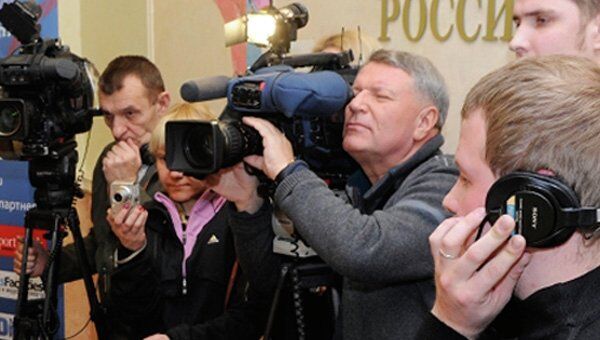 Russian media experts said on Wednesday the country deserves its 148th position out of 179 on the 2013 Press Freedom Index, six points down from last year.

MOSCOW, January 30 (RIA Novosti) - Russian media experts said on Wednesday the country deserves its 148th position out of 179 on the 2013 Press Freedom Index, six points down from last year.

Reporters without Borders, which published the index on Tuesday, said Russia has lost points again because “since Vladimir Putin’s return to the presidency, repression has been stepped up in response to an unprecedented wave of opposition protests.”

“The country also continues to be marked by the unacceptable failure to punish all those who have murdered or attacked journalists.”

He cited the US Constitution, where “just one amendment guarantees freedom of the press.”

“However, we begin to dictate to society and to traumatize it, setting one demand after another.”

His view was echoed by TV journalist Leonid Parfyonov, who believes the rating aptly sums up the freedom of the press situation in Russia.

“Things are not getting any better,” he said. “They have not improved over the past year.”

MediaSoyuz Vice President Yelena Zelinskaya suggested, however, that the report’s authors only took into account the government’s treatment of the press, while ignoring some “new trends.” She pointed to “an upturn in civic activism” in Russia.

The institution of online media, which has “a very strong influence on the freedom of expression,” has strengthened considerably, she said.

“In that sense, the situation has improved, as civil society is assuming more and more responsibility,” she said.

Commenting on the report, Reporters Without Borders Secretary General Christophe Deloire said the index “does not take direct account of the political system, but it is clear that democracies provide better protection for the freedom to produce and circulate accurate news and information than countries where human rights are flouted.”

“Opposition protests on an unprecedented scale showed civil society to be more vocal than ever,” the report said. “The state responded with a wholesale crackdown: re-criminalization of defamation, tighter control of the Internet, making foreign funding of human rights organizations a crime.”

“This marked the start of a new era in relations between the state and society that presents huge challenges for freedom of information.”

Russia’s neighbor Ukraine has dropped 10 positions, down to 126th, in the worst result since the “Orange Revolution.” Belarus placed 157th and Kazakhstan 160th.

The top three countries that respect press freedom are Finland, Netherlands and Norway, the report said.

At the bottom of the index are the same three countries as before: Turkmenistan, North Korea and Eritrea (179th).

The United States is in 32nd position.

Reporters without Borders is a French-based non-profit organization that defends the freedom to be informed and to inform others throughout the world. Its first Press Freedom Index was released in 2002.