US Soldier Shows Off Double-Arm Transplant 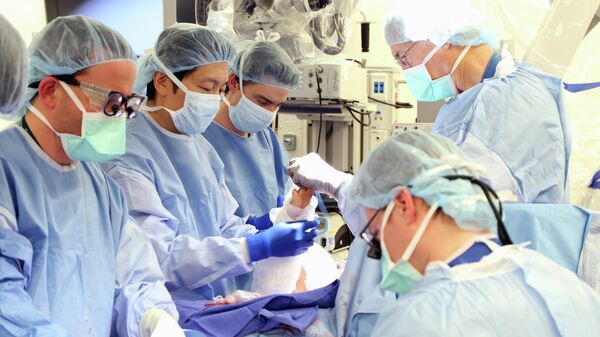 Brendan Marrocco did something remarkable on Tuesday, something he couldn’t have done six weeks ago, or any time since 2009 when he lost both arms and both legs to a roadside bomb in Iraq: he used his own hand to brush the hair away from his face.

January 30 (By Maria Young for RIA Novosti) Brendan Marrocco did something remarkable on Tuesday, something he couldn’t have done six weeks ago, or any time since 2009 when he lost both arms and both legs to a roadside bomb in Iraq: he used his own hand to brush the hair away from his face.

“Six weeks ago today this team of physicians and nurses helped restore the physical and psychological well-being of someone most deserving, who lost both arms and legs serving our country nearly four years ago,” said lead surgeon Dr. Andrew Lee, director of the Johns Hopkins School of Medicine’s Department of Plastic and Reconstructive Surgery in Baltimore.

A team of 16 surgeons performed an extremely rare double-arm transplant during a 13-hour operation at The Johns Hopkins Hospital on Dec. 18.

“Brendan’s recovery has already been remarkable, and now, his hope to lead a more normal life has been boosted by this double-arm transplant,” Lee added.

Doctors say in time, Marrocco, 26, should be able to throw a football, drive a car and do a long list of other things that were impossible before the surgery.

“I feel like I’ve been given a second chance,” Marrocco said. “I’m excited for the future.”

“Now I can move my elbows, rotate my hands a little bit,” he said, and gesturing to his right arm, added, “This arm is not much movement, not yet, but I’m hoping to get more.”

Marrocco said he has little memory of the day he lost all four limbs. It was Easter Sunday 2009 when the military vehicle he was driving was hit by a makeshift bomb during a routine patrol just outside of Baghdad.

His injuries were so severe doctors say he almost certainly would not have survived just five or ten years ago.

He is the first soldier to survive losing both arms and legs in the Iraq War, and only the seventh person in the US to undergo a successful double-arm or double-hand transplant.

It’s a procedure his doctors say is the most extensive and complicated transplant surgery ever performed in the US.

“I never really accepted the fact that I didn’t have arms, so it’s like it never happened, like I went back four years ago,” Marrocco said.

Before the operation could take place, doctors put Marrocco on a unique protocol designed to limit the number of medications he will need in the years to come, and then treated him with bone marrow from the donor of his new arms in an effort to reduce the risk that his body would reject the limbs.

The procedure itself is so complex, the team of surgeons practiced the surgery four times using cadavers before they went to work on Marrocco, connecting bones, blood vessels, muscles, tendons, nerves and skin on both arms.

“Although Brendan’s surgery has gone well, the recovery period is not without risk,” Lee said. “The progress will be slow, but the outcome will be rewarding.”

Nerves rejuvenate at a maximum speed of one-inch (2.5 centimeters) per month, Lee said, which means it will be several years before Marrocco will achieve the fullest recovery possible.

His doctors liken the next few years to a full-time job of physical therapy, but say Marrocco is up to the task.

“If I truly care about something, in my heart, I would go through hell to do it, and that’s basically what I’m doing now,” said Marrocco.

“Right now we’re the ones holding him back,” Shores added.

Marrocco said the secret to his success, if there is one, is to not give up, a message he’d like to share with other wounded warriors and amputees who are surviving catastrophic injuries and facing long and difficult recoveries.

“Life gets better,” he said, “and you’re still alive, so be stubborn, and work your ass off. It’s worth it.”