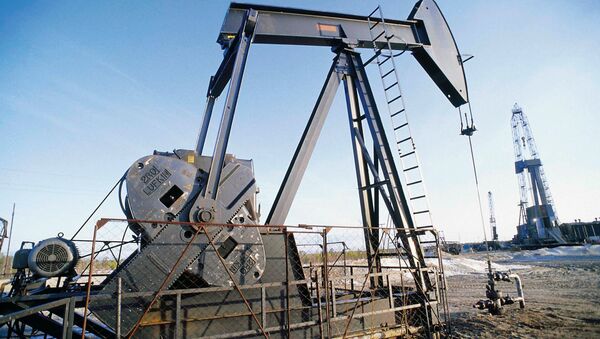 Russia’s Oil Wealth Fund will be totally consumed if world oil prices plunge to $60 per barrel and stay at that level for a year, experts from the Russian School of Economics (VSE) said on Tuesday.

MOSCOW, January 29 (RIA Novosti) – Russia’s Oil Wealth Fund will be totally consumed if world oil prices plunge to $60 per barrel and stay at that level for a year, experts from the Russian School of Economics (VSE) said on Tuesday.

That scenario presents “a shock not only for the budget system but also for the economy as a whole,” experts from the Higher School of Economics' Development Center said in their stress-test survey.

The stark warning echoes the Precarious Stability scenario outlined by former Russian Finance Minister Kudrin at the World Economic Forum at Davos last week, which predicted an oil price plunge to $60 per barrel, forcing the Russian government to preserve social stability at the expense of economic development.

Last week's Davos forum was presented with three broadly pessimistic scenarios for Russia’s economic development, based on a poll of over 350 Russian and foreign economists and decision-makers who warned that the Russian economy remained acutely vulnerable to world energy prices and could become more risky for investment.

World prices for benchmark Brent crude have been hovering at about $110 per barrel in recent months, a level Prime Minister Dmitry Medvedev said was optimal for both oil consumers and producers.

Kudrin warned on Monday that the eurozone sovereign debt crisis was continuing and the global crisis could worsen as soon as the end of this year, which would certainly cause a plunge in demand for oil and hence oil prices. That could undermine the Russian economy, which continues to depend heavily on raw material exports.

Aside from Oil Wealth Fund depletion, “Russia’s GDP would contract by 5.9 percent compared with 2012 while budget revenues [would fall] by 3 trillion rubles ($100 billion) or 23 percent,” the VSE Development Center survey said.

“The budget deficit would widen to 3.5 trillion rubles (6.4 percent of GDP) and the ruble’s average yearly rate would fall to 35.5 rubles to the dollar in 2013.”

The ruble is currently trading at about 30 rubles to the dollar. Russia’s Oil Wealth Fund totaled 1.886 trillion rubles ($63 billion) at the start of 2013.

This scenario “is not the most probable” one, considering current world economic developments, the survey said, however.

The Development Center experts were also pessimistic about Russia’s economic performance in 2012, saying the macroeconomic data were increasingly reminiscent of the stagnation period in the Soviet economy thirty years ago.

“The most important sectors of the economy slowed their growth from the very start of the previous year, which was related both to the deterioration in external economic conditions and the pessimism of businesses over the prospects of domestic demand and the expediency of investment in development,” the survey said.