‘No flexibility’ in US Missile Talks - Medvedev 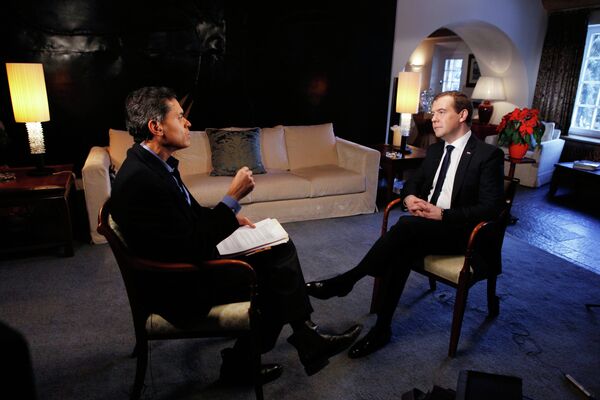 © RIA Novosti . Dmitry Astakhov
/
Go to the mediabank
Subscribe
International
India
Africa
Russian Prime Minister Dmitry Medvedev said on Sunday he sees “no flexibility” in a dispute over US missile defense plans, warning that a new arms race could emerge if talks fail.

MOSCOW, January 27 (RIA Novosti) – Russian Prime Minister Dmitry Medvedev said on Sunday he sees “no flexibility” in a dispute over US missile defense plans, warning that a new arms race could emerge if talks fail.

“If we talk about the subject itself, it is extremely difficult. And so far we don’t see any flexibility. There are no easy solutions in terms of anti-missile defense. There is no flexibility. We have not changed our previous positions – the US has one opinion and the Russian Federation, unfortunately, has a different opinion. And these positions are not getting any closer,” Medvedev said in an interview with CNN.

US President Barack Obama was famously caught on a open mic in March 2012 telling then President Dmitry Medvedev to pass on to Vladimir Putin that he would have “more flexibility” after his reelection.

Russia insists that the US set out its assurances that the missile shield will not be directed against it in legally binding documents, something Washington has refused to agree to.

“We do not want next generations of politicians in 2019 or 2020 to take decisions which would open a new page in the arms race. But such a threat exists and everyone in Russia and the United States should understand this, that’s why we still have chances to come to an agreement,” Medvedev said.

“We clearly understand that if we do not have guarantees such as the pairing of our programs, that means that missile defense could also work against the Russian nuclear arsenal. What does this mean? This means that the parity, which we recorded with President Obama by signing the New START treaty (a very important and very helpful treaty, by the way: I think this is the achievement of the so-called reset), [the parity] is being cracked by that, because the missile defense – is a direct continuation of nuclear offensive capability, combat nuclear weapons,” Medvedev said.

The United States says the disputed missile shield is designed to protect against “rogue states” such as Iran and North Korea, but Russia is concerned it could be used to neutralize its own nuclear deterrent.

Russia has pledged to deploy a host of countermeasures to tackle any NATO missile defense shield in Europe, including forward deployments of tactical nuclear missiles in its Baltic enclave of Kaliningrad.