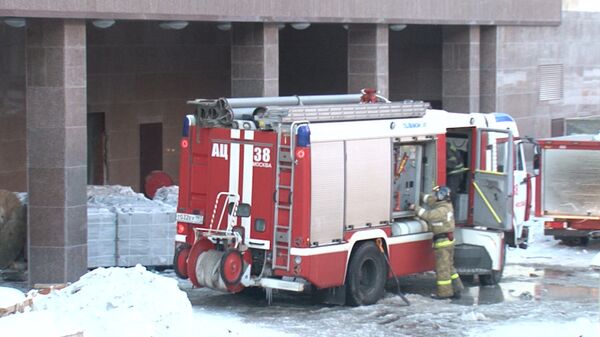 © RIA Novosti
Subscribe
Ten people died and at least 14 were injured on Saturday after a fire at an underground car park in a building in southwest Moscow, local police said.

MOSCOW, January 26 (RIA Novosti) - Ten people died and at least 14 were injured on Saturday after a fire at an underground car park in a building in southwest Moscow, local police said.

Seven of them died while on the way to hospital, Emergencies Ministry spokesman Viktor Bryukov said. Another ten people were rescued unharmed, he added.

At least two of the injured are in a critical condition.

All those who died were thought to be construction workers who were carrying out work on the site, and were from the "near-abroad," a term officials in Russia often use for those from former Soviet republics. Many people from the former USSR republics work in construction in Russia, and some sleep on site.

The building had been visited several times by fire safety inspectors, Brukov said.

An Emergencies Ministry source said the preliminary cause of the fire, which broke out just before 5 p.m. local time, was due to an infringement of fire safety regulations which caused construction materials to catch fire.

The building where the fire happened, at Khersonskaya Street in the Zyuzino district, was a new one that had only been completed last year, city construction officials said.

Earlier this week, construction workers had to be evacuated from a skyscraper in the new Moscow City financial center district after a fire caused by a heater.

An earlier version of this story listed the number of dead at nine.