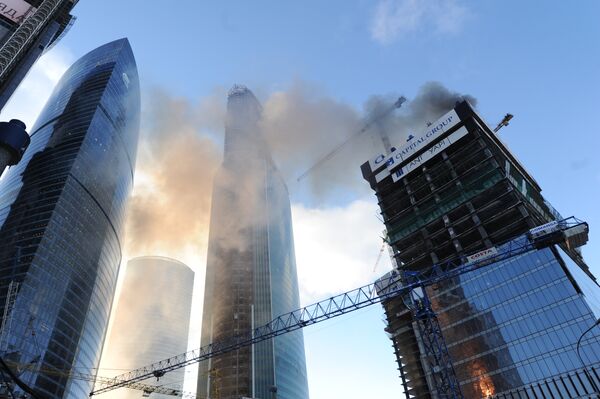 A skyscraper caught fire in the Moscow City business complex in Russia’s capital on Friday, injuring at least one construction worker.

Clouds of dark gray smoke were seen billowing out a building under construction in the western part of downtown Moscow on Friday morning.

"The fire started between the 22nd and 23rd floors of the 25-story building under construction," a source in the Emergencies Ministry told RIA Novosti.

Some 220 workers were hurriedly evacuated from the construction site, police said. One man felt intoxicated with smoke and sought medical help.

The fire, which engulfed some 60 square meters (197 feet), was put out by midday. Officials said the fire could have been caused by the malfunction of a fan heater in the building of the Capital Group construction company.

This was not the first fire incident in the Moscow City business skyscraper complex over the past several months. Another skyscraper under construction at this location caught fire on the 67th floor in April 2012.