Russia’s Internal Affairs No Concern of US – Putin Spokesman 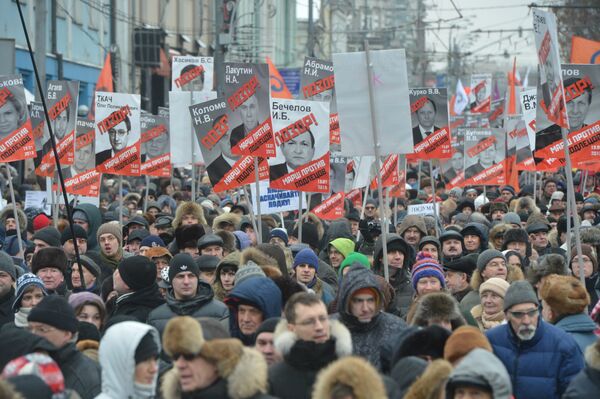 The United States has no place in any dialog between Russia’s government and opposition movements opposed to President Vladimir Putin’s rule, Putin’s spokesman has told a US journal.

MOSCOW, January 25 (RIA Novosti) – The United States has no place in any dialog between Russia’s government and opposition movements opposed to President Vladimir Putin’s rule, Putin’s spokesman has told a US journal.

“The dialog between the Russian government and the opposition cannot be a subject of the bilateral relationship between Moscow and Washington, and in no way can be an issue of [state-to-state] discussion,” Dmitry Peskov told The National Interest, a bi-monthly American foreign policy journal, in an interview published on Thursday.

Putin has frequently accused the United States of being behind the unprecedented protests against his rule that broke out in December 2011, while late last year the alleged torture of opposition activist Leonid Razvozzhayev sparked a diplomatic row between the two former Cold War foes.

The United States also slammed last year a Moscow court’s decision to jail members of the anti-Putin punk rock group Pussy Riot over a protest in Russia’s main Orthodox cathedral. Washington has also expressed concern over the treatment of protest leaders such as Alexei Navalny and Sergei Udaltsov, both whom are facing long jail terms.

But Peskov told the journal Russia would not take into account US concerns over what The National Interest called “the domestic climate inside Russia.”

“Those are our domestic affairs, our domestic politics,” Peskov said. “We are a democratic country sharing the same values with the whole world, but we are a country that will solve all the problems, domestic and the like, without any interference from abroad.”