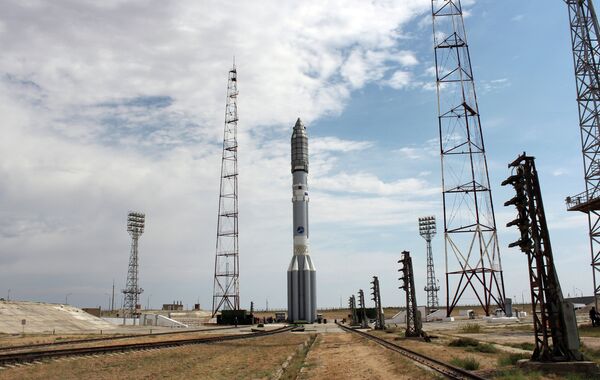 Russian Foreign Minister Sergei Lavrov attempted to play down a dispute between Russia and Kazakhstan over terms for use of the Baikonur space center on Friday, after Russian media reports the previous day claimed the two states were on the verge of breaking off joint cooperation at the site.

MOSCOW, January 25 (RIA Novosti) - Russian Foreign Minister Sergei Lavrov attempted to play down a dispute between Russia and Kazakhstan over terms for use of the Baikonur space center on Friday, after Russian media reports the previous day claimed the two states were on the verge of breaking off joint cooperation at the site.

Russian media reports on Thursday claimed Russia and Kazakhstan might cease cooperation on joint space projects due to a limitation imposed by Kazakhstan on the number of Russian launches from Baikonur.

The reports cited diplomatic notes between the two states, which Lavrov said were an attempt by the media to "make a mountain out of a molehill."

"A note was published in the media - I don't know who published it. We use notes, it's a normal form of diplomatic relations," he said following talks with his Kazakhstan counterpart Erlan Idrisov.

Idrisov also attempted to play down the situation, claiming “there is no conflict” over Baikonur.

Kazakhstan stopped Russia launching several rockets from Baikonur in May 2012 in a dispute over a drop-zone for falling debris from launches. Kazakhstan insisted this must be covered by a supplement to the main rent agreement on use of the site. Kazakhstan agreed in June to let launches go ahead, following talks with Prime Minister Dmitry Medvedev and his Kazakhstan counterpart Karim Massimov.

Russia is doing everything to address Kazakhstan’s environmental concerns over space launches, Lavrov said on Friday, adding its Russian Proton carrier rockets have been modernized and the number of launches is agreed every year. The Kazakhstan government previously approved 12 Russian launches in 2013 (14 in 2012) whereas Russia had planned to make 17.

“The presidents understand the need for addressing the situation and a decision has already been made to set up a special intergovernmental commission on the Baikonur complex,” Lavrov said

The issue of control over Baikonur and the rent Russia pays Kazakhstan to use the facility have been the subject of ongoing dispute between the two nations ever since Kazakhstan gained independence from the USSR.

The two sides signed an agreement in Astana on January 9, 2004, extending Russia's use of the space center's facilities until 2050. Russia pays an annual fee of approximately $115 million to use the space center, which currently has the world's busiest launch schedule, as well as $50 million annually for maintenance.

Kazakhstan ratified the deal in 2004, after Russia's threatened to suspend other space projects with Kazakhstan if it did not do so.

Russia and Kazakhstan are working to build a new space launch facility at Baikonur, called Baiterek, to launch Angara carrier rockets capable of delivering 26 metric tons of payload to low-Earth orbits. The project is being implemented on a parity basis and enjoys tax and customs privileges. The two countries have reportedly each allocated $223 million to build Baiterek under a 2004 agreement.

Russia intends to eventually leave Baikonur and conduct its launches from the Plesetsk Cosmodrome in the Arkhangelsk Region and the Vostochny space center in the Far East.