A Week When Russian-Georgian Relations Began to Warm Up 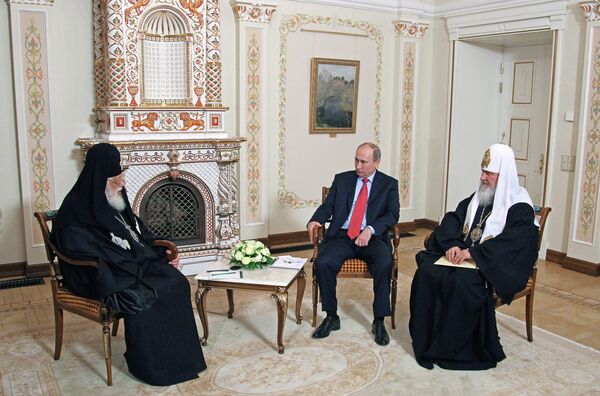 It has been a remarkable week for emotionally charged Russian-Georgian relations, which were practically broken off in 2008 as a result of the military conflict around South Ossetia.

MOSCOW, January 25 (Andrei Zolotov, Jr., RIA Novosti) - It has been a remarkable week for emotionally charged Russian-Georgian relations, which were practically broken off in 2008 as a result of the military conflict around South Ossetia. Simultaneously in several arenas, high-level officials from the two countries met and made gestures indicating their intent to thaw relations, if only in the humanitarian and economic fields so far.

First, Georgia’s most trusted public figure, often referred to as the nation’s spiritual leader, the 80-year-old Catholicos-Patriarch of the Georgian Orthodox Church, Ilia II, came to Moscow last Sunday for a high-profile week-long visit. Although the official purpose of the visit was to receive a prestigious award on Monday from a Russian Orthodox Church-affiliated foundation for his contribution to fostering the unity of Orthodox Christian nations, he also met with Russian President Vladimir Putin on Wednesday and “relayed greetings” from the Georgian Prime Minister Bidzina Ivanishvili, the Kremlin said.

Putin, in response, thanked the Patriarch for “doing all possible for maintaining humanitarian, spiritual and cultural contacts between our brotherly nations in today’s complicated conditions – I mean the uneasy intergovernmental relations between Russia and Georgia,” the Kremlin press service reported.

That same night in Davos, Switzerland, Ivanishvili informally met Russian Prime Minister Dmitry Medvedev at a reception at the World Economic Forum for several minutes, Georgian Prime Minister Maya Pandzhikidze was reported by RIA Novosti as saying on Georgian television. “They only had enough time to say hello and meet each other, nothing more,” she said. Earlier, the Georgian foreign ministry had said no meetings between Ivanishvili and Medvedev had been planned for Davos.

On Friday morning, Ivanishvili attended a “Russian breakfast” in Davos, meeting with Russian businessmen. “The conversation was about the beginning, to be more precise, restoring of Georgian exports to Russia, as well as the issues of economic cooperation between the two countries,” Georgian Economics Minister Georgy Kvirikashvili was quoted by RIA Novosti as saying on Georgian television.

Georgian exports to Russia were, first and foremost, wine and mineral water, which were banned by the Russian authorities, ostensibly for quality reasons, after political relations soured in 2006.

In the meantime, Russia’s chief public health official, Gennady Onishchenko, whose office is responsible for the bans, said on Thursday he expected to meet a Georgian delegation on February 4 and after that might go to Georgia himself. He said he had seen a list of Georgian officials who are expected to come to Moscow and said Georgia had serious intentions, RIA Novosti reported.

Such a series of contacts this week is certainly not coincidental, but a result of long preparatory work, experts said on Friday.

Since the “Georgian Dream” coalition led by Ivanishvili came to power in October last year under the banner of normalizing relations with Russia while maintaining Georgia’s Euro-Atlantic orientation, several gestures were made on the part of the new Georgian cabinet, which were originally met with caution in Moscow. But now the climate between the two countries is clearly warning up.

Kirill Koktysh, an associate professor at the Moscow State Institute of International Relations, who follows Russian-Georgian relations, said a visit by Patriarch Ilia had been carefully prepared for a long time, and this was not the first attempt to organize it.

“It is a result of long efforts,” said Alexei Sushentsov, another teacher at the Moscow State Institute for International Relations. “Clearly, there is an incentive on the part of Russia to look for ways to, if not yet normalize relations, then to create conditions for their normalization. Despite the fact that both sides continue to maintain fundamental grievances against each other that they cannot drop, at the same time both sides are interested in reviving official contacts, primarily economic and cultural ones.”

Normalization of relations between Tbilisi and Moscow was unlikely to be quick and smooth, he added. Furthermore, it might be complicated by the possible instability of Ivanishvili’s coalition – just this week Ivanishvili downgraded the position of Irakly Alasania, head of a coalition partner party, who remains the defense minister, while no longer having the status of deputy prime minister. The presidential elections in October could also present another banana skin.

But so far, there are signs that Putin himself has embraced the idea of improving relations with Georgia.

Speaking after a liturgy in the Kremlin on Tuesday morning, Patriarch Ilia thanked not only Russian Orthodox Patriarch Kirill, but also Putin for awarding him with the prize, although Putin officially has nothing to do with it. Meeting with Russian journalists on Tuesday evening, he praised Putin as “a wise man, who wants to get out of the dead-end, where we found ourselves.”

The Patriarch said he would raise the issue of Abkhazia and the “Tskhinvali region,” as South Ossetia is called by Georgians who do not recognize its independence. But nothing on that matter was reported by the Kremlin press service after the meeting on Wednesday, which limited its report to the opening statements.

There seems to be an understanding that the particularly difficult issues such as the status of Abkhazia and South Ossetia, should not be touched upon. Most Georgians see them as parts of their territory forcefully cut off with Russia’s help, while Russia has formally recognized their independence.

The restoration of diplomatic relations between the two countries is another complex issue. Georgia maintains it cannot have an embassy in Moscow as long as Abkhazia and South Ossetia have embassies there.

“Both sides are interested in beginning real contacts in various fields disregarding diplomatic relations,” Sushentsov said. “Perhaps, eventually these growing ties will require regulations, which will require agreements, and bilateral agreements presume diplomatic relations. But it is not an issue for this year, maybe not even for the next year.”

Patriarch Ilia is scheduled to return to Tbilisi on Saturday.