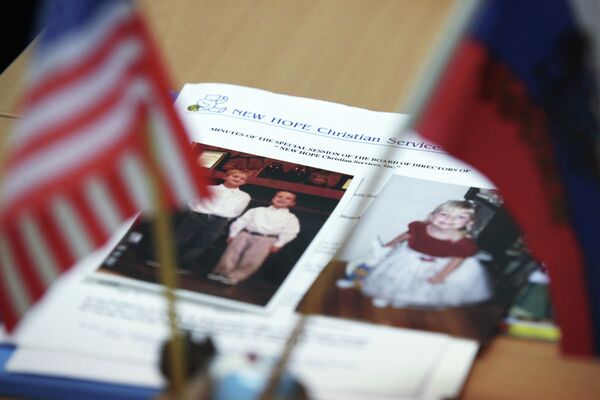 Russian children whose adoptions received court approval before January 1, 2013, must go to their adoptive parents in the United States even if the decisions formally take effect after that date, the Russian Supreme Court ruled this week, clarifying how to implement a ban on adoptions of Russian children by Americans.

MOSCOW, January 23 (RIA Novosti) – Russian children whose adoptions received court approval before January 1, 2013, must go to their adoptive parents in the United States even if the decisions formally take effect after that date, the Russian Supreme Court ruled this week, clarifying how to implement a ban on adoptions of Russian children by Americans.

“Children whose adoptions by US nationals were approved by courts before January 1, 2013, and have come into force, including after January 1, 2013, must be turned over to their adoptive parents,” the deputy chairman of the Russian Supreme Court said in a letter addressed to lower courts and posted on the court’s website on Tuesday.

The decision should ease the confusion and red tape encountered by a number of American families who have come to Russia in hopes of taking home adoptive children whose cases had already been approved by Russian courts.

“In accordance with Clause 3 of Article 125 of the Russian Family Code and Part 2 of Article 274 of the Civil Procedure Code, the rights and duties of adoptive families take effect as of the day the court’s approval of the adoption comes into force,” says the letter, signed by deputy chairman Vasily Nechayev.

Russian Foreign Minister Sergei Lavrov, who initially expressed doubts about the ban, defended it Wedneday, saying it "reflects our assessment of what's happening in the US adoption system overall." He added that in many cases American parents have rejected their adoptive children.

It is not clear how many families have been affected by the ban. The US State Department has said that between 500 and 1,000 American families had been at some stage of trying to adopt Russian children when it took effect on January 1. Russian officials, however, have said the number is smaller.

The Russian adoption ban, introduced late last year, is part of Moscow's response to the US Magnitsky Act, signed into law by President Barack Obama in December. The Magnitsky Act calls for US travel and financial sanctions against Russian citizens deemed by the American government to have violated human rights.

Figures from the US State Department show more than 60,000 Russian children adopted by American families in the last 20 years, including 962 last year.

Russian officials blame US adoptive parents for the deaths of at least 19 of those children. The adoption ban is named after Dima Yakovlev (known also by his American name, Chase Harrison), a Russian toddler who died of heatstroke in 2008 after his American adoptive father left him in an overheated car for hours.