Russia Will Retaliate for US Measures - Foreign Minister 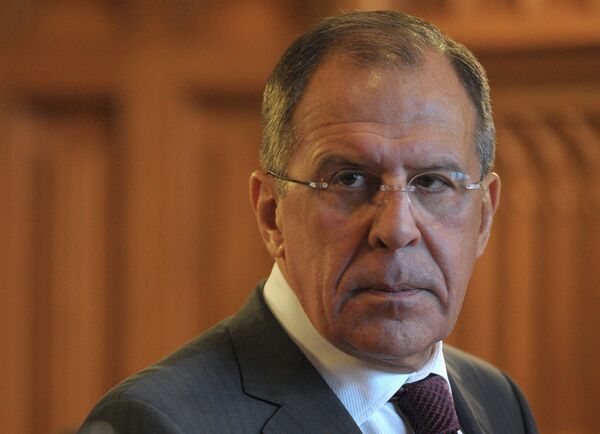 © RIA Novosti . Grigoriy Sysoev
/
Go to the mediabank
Subscribe
International
India
Africa
Moscow will continue to retaliate for any unfriendly measures implemented by Washington, but hopes to develop improved relations with the United States and will coordinate its actions in the international arena, Russia's Foreign Minister Sergei Lavrov said on Wednesday.

MOSCOW, January 23 (RIA Novosti) - Moscow will continue to retaliate for any unfriendly measures implemented by Washington, but hopes to develop improved relations with the United States and will coordinate its actions in the international arena, Russia's Foreign Minister Sergei Lavrov said on Wednesday.

"Of course we will retaliate for unfriendly acts, but at the core of our position is the development of Russian-American links in all fields, including in the international arena," he said at a press conference on Russian Foreign Policy in 2012 in Moscow.

Relations with America retained their key role in maintaining security in the Euro-Atlantic area as a whole and "for support of global stability" in 2012, he said.

"We are interested in constructive dialog, in the development of stable, mutually beneficial cooperation, particularly in investment, in economic and trade relations and personal contacts," he said, recalling that last year a revised visa regime came into force between the two states.

He expressed hope that this process would continue, eventually leading to a visa-free regime between Russia and the United States.

Lavrov said the “reset” in relations between Russia and the United States, started by Washington, cannot last forever, otherwise it is just a “system error.”

“If this is a computer term, everyone should realize that an ongoing ‘reset’ is a failure of the system and the system is frozen,” he added.

The issue of missile defense remains the main stumbling block in Moscow’s relationship with Washington, Lavrov said, as the United States continues building its missile defense system without taking Russia’s stance into account.
In addition, other disputes, such as the case of lawyer Sergey Magnitsky, which is still being investigated in Russia, have also appeared. But Russia remains open for dialogue, he said.

Lavrov also said he plans to meet with US Vice President Joe Biden at the Munich Security Conference in February.

“I hope to meet with the directors of the US delegation; the Vice President Joe Biden is so far planning to attend. We will make sure to speak about all the issues at hand and to see how we can develop our relationship,” he added.

(Updated with comments on the "reset," missile defense and the possible Munich meeting with Vice President Joe Biden).