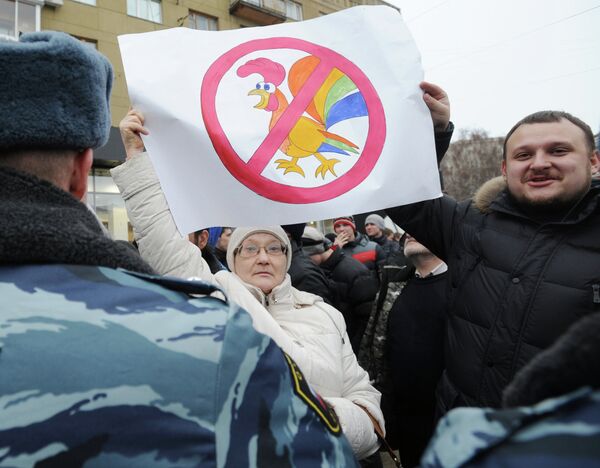 Gay activists were beaten by an angry crowd during an authorized picket in the city of Voronezh in southwest Russia on Sunday.

VORONEZH, January 20 (RIA Novosti) – Gay activists were beaten by an angry crowd during an authorized picket in the city of Voronezh in southwest Russia on Sunday.

Voronezh gay activists earlier announced their intention to hold a protest against the so-called homophobia bill, which will be discussed in Russia’s parliament soon. The picket in the square near a monument to Russian poet Ivan Nikitin was sanctioned by the city authorities and was expected to gather about 50 gay activists.

The opponents of the LGBTI community announced their intention through social networks to break up the picket. Several hundred people opposing gay propaganda in Russia gathered near the monument and sealed off all approaches to it to prevent the picket.

When about ten gay activists appeared, the crowd first pelted them with snowballs and then rushed at them, bringing them down to the ground and starting to beat them.

An old woman, who was passing by, was also hurt in the clash. At least one of the picketers had to seek medical assistance.

Police are now controlling the area.

Homosexuality was only decriminalized in Russia in 1993 and attitudes to gays and lesbians remain hostile. Former Moscow Mayor Yuri Luzhkov once dubbed gay pride “Satanic.”

Updated to correct location of Voronezh from southeast Russia to southwest Russia on 21.01.13