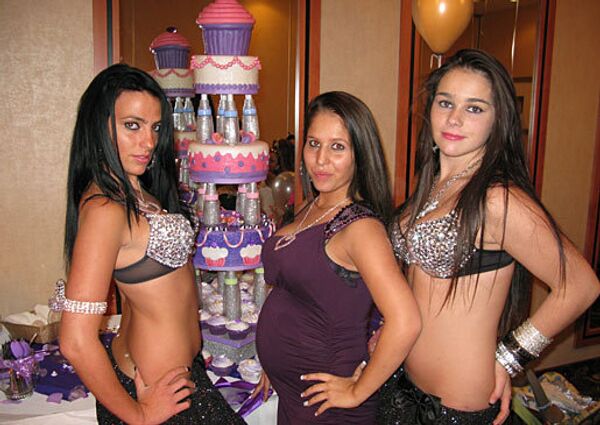 © TLC/Discovery Communications
Subscribe
From the saucy, southern, six-year-old pageant queen Honey Boo Boo, to the hard-drinking, hypersexual Italian-Americans on shows like “Jersey Shore,” the brazen, politically incorrect themes on reality television in the United States are hard to escape.

WASHINGTON, January 18 (By Sasha Horne for RIA Novosti) From the saucy, southern, six-year-old pageant queen Honey Boo Boo, to the hard-drinking, hypersexual Italian-Americans on shows like “Jersey Shore,” the brazen, politically incorrect themes on reality television in the United States are hard to escape.

The genre, first made popular in the early 2000s, has dominated televisions across America, giving birth to some of the most talked about shows of all-time, and its “stars” have become household names and in some cases gained global fame.

But critics of reality TV have accused the shows of perpetuating damaging ethnic, cultural and gender stereotypes, contending that viewers might take the shows at face value, failing to realize that the “reality” depicted on screen is nothing more than a heavily-scripted producer driven ratings ploy.

“When these shows started, the idea was that we put real people in a contrived situation,” Eric Deggans, an author and TV media critic for the St. Petersburg, Florida Times told RIA Novosti.

And as the shows gained popularity, Deggans said the outcomes went from authentic to manufactured, with ratings serving as the ultimate motivation.

“Producers need story lines to engage viewers and the quick and easy way to create them is to reduce people to stereotypes,” Deggans said.

Take the success of The Learning Channel’s (TLC) summer hit “Here Comes Honey Boo Boo,” chronicling the life of Alana "Honey Boo Boo" Thompson, a chubby, child beauty pageant participant from a small town in the southern state of Georgia and her over the top family who have nicknames like “Chubs” and “Sugabear.”

“If you watch ‘Honey Boo Boo,’ it seems like the camera people are making fun of these guys,” observed Rodney Ho, a TV writer for the Atlanta Journal-Constitution in a commentary on the show.

A few examples from the show: Alana’s mother June is months away from becoming a grandmother at the age of 33. The family participated in an event called the “Redneck Olympics” where children took turns belly flopping into a pit of mud. None of June’s four daughters are from the same father. And the family is seen making spaghetti sauce by mixing ketchup and butter.

“Let’s say you’re talking to the camera and you sneeze or cough or fart; it doesn’t usually make it into the final cut. But on ‘Honey Boo Boo,’ they seem to go out of their way to show every time the poor woman sneezes or burps,” Ho said referring to Honey Boo Boo’s mother.

Southerners have tried for decades to dispel long held stereotypes that they are poor, lazy and stupid.

“On these shows, decades of stereotypes about the South have risen again, ready to make a new generation laugh at the expense of real understanding,” Deggans said in an NPR commentary on the so-called “Redneck TV” phenomenon.

Producers who work on the shows maintain the participants are willing, and if ratings are any indication, audiences love what they see.

"There is certain coolness to it," said John Stevens, executive producer of the new MTV reality show “Buckwild” that follows around a group of 20-somethings from rural West Virginia.

The show has been described as a cross between “Here Comes Honey Boo Boo” and “Jersey Shore,” and in between the booze fueled catfights and sexual hookups, the cast participates in array of outdoor activities including mud racing, squirrel hunting and rope swinging.

"I think it’s going to get people talking and it might change people’s perspectives. These kids are totally wild and carefree. It will be very refreshing to the MTV audience,” he said in an interview with Entertainment Weekly.

US Sen. Joe Manchin from West Virginia has asked MTV to cancel “Buckwild.” In a December letter to the network Manchin wrote, “Instead of showcasing the beauty of our people and our state, you preyed on young people, coaxed them into displaying shameful behavior – and now you are profiting from it. That is just wrong. This show plays to ugly, inaccurate stereotypes about the people of West Virginia.”

MTV executive Colin Nash responded by saying, “It's not our goal or intention to stereotype anyone when we're making a TV show," USA Today reported. "Our show is about this group of kids who happen to live in West Virginia, and I think that people who watch the show will become invested in these kids and their characters and their stories, and hopefully appreciate West Virginia as a backdrop."

Southern themed reality shows aside, there are a slew of other popular shows that critics have said perpetuate negative stereotypes: “The Bachelor,” with its portrayal of women, African Americans in shows like VH1’s “Basketball Wives,” Persians in “Shahs of Sunset,” and people of the Roma or Romani ethnic group, also referred to on television as “Gypsies.”

On one episode of TLC’s “My Big Fat American Gypsy Wedding,” a 14-year-old home-schooled girl living in a camper with her family has a Halloween party in hopes of finding a husband. Each episode features young scantily clad “Gypsy” teens, preparing to get married, many of them before they turn 18. On the show, bleach is not just a product the women use to dutifully clean up after their husbands, it doubles as toothpaste.

“Here was an opportunity to dispense with the silly outdated notions that we all live in trailers and marry off our tween daughters, that Romani women prefer cleaning baseboards to getting an education, that our men drink more than they work,” wrote author Oksana Marafioti who is of Romani decent, in a column on Slate.

Instead, critics like Marafioti believe the show plays up the stereotypes for viewership.

“Grab your bleach and your tightest dress. You're going to want to look good for this premiere,” read a promotion for “Gypsy Sisters” a new spin-off series featuring some of the women from the original show.

Outraged viewers created several online petitions calling for TLC to ax the show, but with only a few hundred signatures, those efforts failed to gain traction.

But there have been at least a few instances where public protest has spooked producers into pulling the plug on a racy show.

In December the Oxygen network announced plans for an upcoming reality special called “All My Babies’ Mamas.”

The show centered around Shawty Lo, a 36-year-old rapper and father of 11 children by 10 different women, with a 19-year-old girlfriend the same age as his oldest daughter.

After a firestorm of backlash including an online petition that garnered more than 100,000 signatures and claims from civil rights groups that the show would perpetuate negative stereotypes about African-American families, the network announced this week it is canning the show.

And with droves of Americans tuning in each week to watch reality television as a guilty pleasure or chance to escape from their own realities, the decades old genre does not show any signs of slowing.

“If you can’t stop people from watching the shows completely the only hope is to educate the viewer and maybe limit your intake of them,” said TV critic Deggans, whose book “Race-Baiter” examines in- part, stereotypes on television.

“Until people begin to change their opinions or get tired of the families, I think you’ll see spin-offs and copycatting of the shows,” Deggans said.

A recent casting ad in search of the “next reality TV star” said it is seeking a “loud, proud southern family.”

From the sound of the ad it seems as if Honey Boo Boo might soon have some competition.