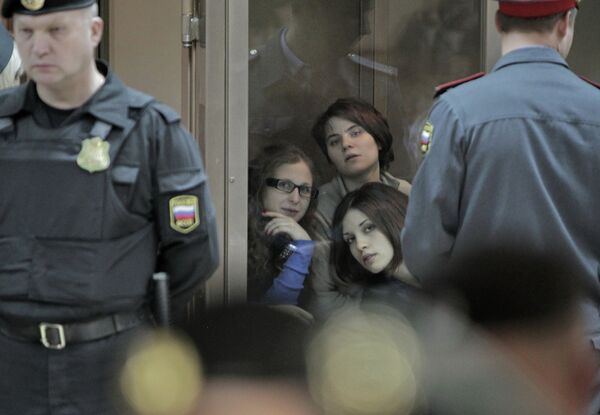 © RIA Novosti . Andrei Stenin
/
Go to the photo bank
Subscribe
A priest who proposed asking members of the Pussy Riot group to “forgive” the Russian Orthodox community has been relieved of his duties, but a church official said he believed the decision was unrelated to the priest’s comments.

MOSCOW, January 16 (RIA Novosti) - A priest who proposed asking members of the Pussy Riot group to “forgive” the Russian Orthodox community has been relieved of his duties, but a church official said he believed the decision was unrelated to the priest’s comments.

Father Dmitry Sverdlov was suspended from carrying out church services for at least five years by order of the Moscow diocese on January 14 for “absence without leave” from his Moscow Region church, a statement on the diocese’s website said.

A spokesperson for the Moscow diocese, Father Nikolai Balashikhinsky, told RIA Novosti that Sverdlov’s suspension was in “no way connected” to his statements on Pussy Riot. Balashikhinsky noted, however, that this was his “personal opinion.”

Sverdlov sparked controversy when he apologized for the actions of Orthodox activists opposed to Pussy Riot in a March 18, 2012, article in the Orthodox Christianity and the World online publication.

“I would ask for forgiveness from the detained for the rabid hatred shown by a section of the Orthodox community over the events in Christ the Savior Cathedral,” Sverdlov commented in the article, called “What Would Priests Say to Pussy Riot?”

Sverdlov also said he would make clear that there “are people in the church…who agree that the problems they [Pussy Riot] voiced do exist.” He declined to comment on his suspension when contacted by RIA Novosti.

A Moscow court found three Pussy Riot members guilty last August of hooliganism motivated by religious hatred over a protest in the landmark Christ the Savior Cathedral, where Russia’s religious leaders frequently mark religious holidays. They were each sentenced to two years in a penal colony. The sentence drew harsh international and domestic criticism.

A court rejected the group’s argument that the February 2012 performance of a song called “Holy S**t” was a protest against the support Russian Orthodox Church head Patriarch Kirill extended to Vladimir Putin ahead of the March 2012 presidential polls. One of the group’s members, Yekaterina Samutsevich, was released on appeal last October.

Patriach Kirill rejected calls for leniency for the Pussy Riot members - two of whom have small children - saying in March 2012, shortly after Sverdlov’s comments, that the “devil” had mocked believers during the group’s protest. The group's members were kept in a Moscow pre-trial detention center from their arrests last March until sentencing.

Another priest, Sergei Baranov from the central Russian Tambov Region, resigned last year over the church’s refusal to forgive the group. He was later defrocked.

Orthodox activists, many of them wearing “Orthodoxy or Death!” t-shirts, picketed the court hearings into the case.

Orthodox believers, including a prosecuting lawyer, also accused the group of being in league with Satan. A program broadcast by the pro-Kremlin NTV channel last September alleged the group’s “demonic” actions had been organized by exiled Russian tycoon Boris Berezovsky and “some Americans.” Both the court hearings and the allegations of Satanism were made months after Sverdlov’s comments.

A popular blogger in Russia, Sverdlov also acted as an elections observer at the December 2011 parliamentary polls, publishing allegations of vote-rigging in favor of the ruling United Russia Party on his blog.

“My career in the Russian Orthodox Church ended yesterday,” Sverdlov said in a Facebook post on Tuesday.