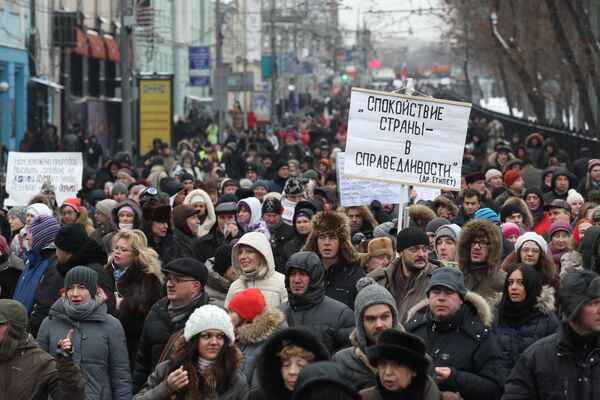 © RIA Novosti . Eugeni Biyatov
Subscribe
Opponents of a Kremlin-approved ban on US nationals adopting Russian children expressed anger on Monday at a state TV program that suggested they were betraying their homeland.

MOSCOW, January 14 (Marc Bennetts, RIA Novosti) – Opponents of a Kremlin-approved ban on US nationals adopting Russian children expressed anger on Monday at a state TV program that suggested they were betraying their homeland.

“State television is brainwashing people,” said Maria Orlovskaya, who helped promote and organize Sunday’s peaceful protest march in central Moscow against the ban. “The authorities are furious because they thought society would stay silent.”

All three of Russia’s main nationwide TV stations – Channel One, Rossiya 1, and NTV – covered Sunday’s rally, but the “Vesti Nedeli” program, aired on Rossiya 1 just hours after the protest, launched by far the most aggressive attack on critics of the ban.

“First the liberals wanted everyone to support that dirty hooliganism in the cathedral,” said Dmitry Kiselyov, the presenter of the program, in reference to the Pussy Riot case that made international headlines last year.

“And now they urge everyone to protest against a ban on the export of children,” Kiselyov went on, citing government statistics he said proved that “adopted children were many times more likely to be killed in the United States than in Russia.”

Organizers said some 50,000 people were at Sunday’s march, while police said the true figure was around five times lower. Opposition bloggers and some independent media mocked the police estimate.

Demonstrators also called on Sunday for the dissolution of parliament, which initiated the law. President Vladimir Putin signed off on the bill late last year and the ban came into force on January 1.

“For the first time in the history of mankind, a protest has taken place in defense of selling the country’s own children abroad,” said Vyachelsav Nikonov, a member of a parliamentary committee on international affairs, in comments carried by the Rossiya 1 program.

Kiselyov also hailed a statement by a radical writer and politician Eduard Limonov, who accused the protesters of “crossing the Rubicon” with what he said was “the first pro-US protest since perestroika.”

“The creative classes in their good coats have broken away from the country and the people,” said Limonov, for many years a persona non grata on state television. “Give them US flags.”

The program also inaccurately stated that the protest had been organized by Russia’s anti-Putin opposition council, rather than by civil activists.

The adoption ban is part of Russia’s wider response to the adoption by the United States of the so-called Magnitsky Act, which introduces sanctions against Russian officials suspected of human rights abuses.

“This was a predictable and Soviet-style response,” said Nadezhda Mityushkina, another organizer and a member of the Solidarnost movement.

Orlovskaya, her fellow organizer, said state media was “turning people into zombies,” especially the elderly and those in the country’s provinces without access to alternative sources of information. “Most people in Russia believe if they see something on television, then it must be true.”

An opinion poll published by the Public Opinion Fund in late December indicated that 56 percent of Russians support the ban. But the law has provoked fierce criticism, with even government figures - including Foreign Minister Sergei Lavrov - speaking out against it.

Both Mityushkina and Orlovskaya also slammed accusations that they were defending the “export of children,” saying that the ban would condemn children with serious illnesses or disabilities to lives of misery.

“Children with disabilities can lead a much better life in the United States or Europe,” said Mityushkina. “Attitudes there, not to mention medical care and funding, are much better.”

“In Russia, doctors try to persuade mothers to give away their children if they are born with disabilities, such as the Down Syndrome,” she went on. “In the West, mothers with Down Syndrome children aren’t faced with attitudes from other mothers, like ‘take that freak away,’ when they go to the playground.”

The vast majority of the leaders of the ongoing anti-Putin protesters stayed out of the limelight at Sunday’s rally, but were full of praise for the protest.

“There was such a powerful energy,” tweeted Sergei Udaltsov, the leader of the Left Front political movement. “To everyone who came to the march – you are real people!”

Alexei Navalny, an opposition figurehead, admitted in a Live Journal post that he had predicted a miserly turnout. “I’m glad I was wrong,” he wrote. “It was inspiring.”

And Orlovskaya suggested Sunday’s rally should serve as the role model for future opposition protests, which experienced infighting and a decline in numbers toward the end of last year.

“We concentrated on two concrete demands – the reversal of the ban and the dissolution of parliament,” she said. “This proved very popular and very attractive. Most protest leaders agreed that this is the way forward.”