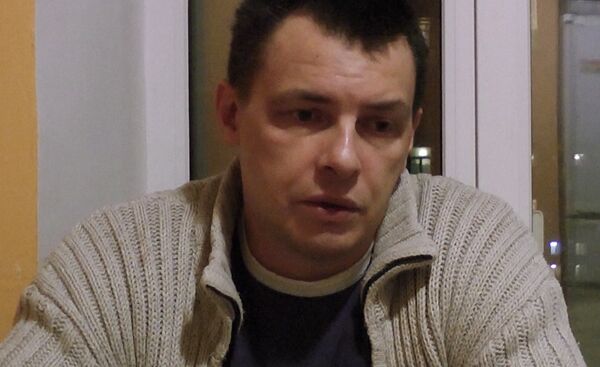 © RIA Novosti
/
Go to the photo bank
Subscribe
A Moscow journalist who was reported missing last week was killed and dismembered by her husband, a cook who co-founded a legendary bohemian hangout in the capital, investigators said on Saturday.

MOSCOW, January 12 (RIA Novosti) – A Moscow journalist who was reported missing last week was killed and dismembered by her husband, a cook who co-founded a legendary bohemian hangout in the capital, investigators said on Saturday.

Alexei Kabanov admitted to committing the murder after fragments of the body of Irina Cherska, including head and limbs, were found on Friday in a car he borrowed from a friend, the Moscow branch of the Investigative Committee said.

Kabanov, 38, said he strangled Cherska, 39, in a flash of domestic violence on Jan. 3 and then dismembered her body and stashed it in the car, hoping to get rid of it later, the committee said on its website.

Meanwhile, he launched a broad effort to locate her, complete with emotional posts on his Facebook page.

Kabanov is now detained and faces up to 15 years in jail on murder charges, to be predated by a check of his sanity.

He is also likely to be stripped of parental rights to Cherska’s three children, aged between two and seven, Russia’s children’s ombudsman Pavel Astakhov said on Saturday.

Kabanov was a co-founder of the Project O.G.I., a club in downtown Moscow that gathered cream of the crop of Russia’s bohemians from writer Dmitry Bykov to rock legend Yegor Letov and even the now-jailed oil tycoon Mikhail Khodorkovsky, not to mention countless humanities students.

The club, launched in 1998, was shut down in 2012. Kabanov and Cherska opened another café, Cherska, in 2010, but it went bankrupt within months.

Several family acquaintances alleged on social networks that Kabanov routinely beat up Cherska, though the accusations could not be verified.

A blog post made rounds on the Russian blogosphere claiming that the case was fabricated to discredit Moscow intelligentsia, a major driving force behind the ongoing anti-Kremlin protests. However, neither Kabanov nor Cherska were politically active, though the latter criticized the Kremlin’s ban on adoption of Russian children by Americans.