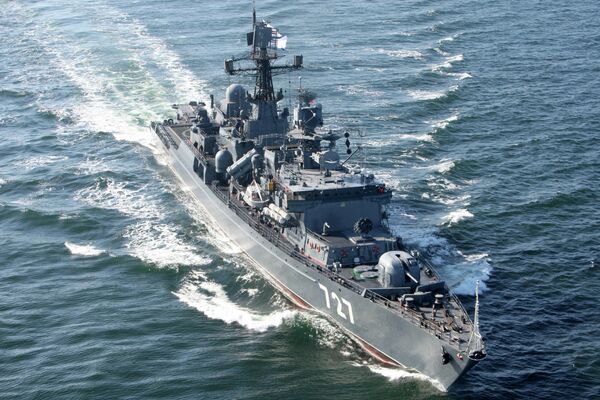 © RIA Novosti . Igor Zarembo
/
Go to the mediabank
Subscribe
International
India
Africa
Ships of the Russian Black Sea Fleet and Baltic Fleets are to start exercises off the coast of Syria the Russian Defense Ministry said on Friday.

MOSCOW, January 11 (RIA Novosti) - Ships of the Russian Black Sea Fleet and Baltic Fleets are to start exercises off the coast of Syria the Russian Defense Ministry said on Friday.

"A tactical group of Black Sea Fleet warships headed by the cruiser Moskva will undertake exercises in the eastern sector of the Mediterranean Sea," the Ministry said. "The tanker Ivan Bubnov has fuelled the ships and emergency drills have been carried out. On January 10 the tanker filled its fuel and water tanks and food stores at the Cyprus port of Larnaka."

A Baltic Fleet group consisting of the patrol vessel Yaroslav Mudry and tanker Lena will dock at Valetta on Malta for storing and to allow the crew to rest, the Ministry said. The ships will then head for the eastern Mediterranean, where the two ships will practice stores transfer at sea in day and night and the Yaroslav Mudry will carry out anti-submarine warfare drills.

Meanwhile the navy's large frigate Severomorsk will visit the Greek port of Suda during an anti-piracy mission to the Gulf of Aden from January 14-18. "Russian Naval Infantry soldiers will visit a NATO training center to get additional training" during the visit, the Ministry said.

The Russian Navy maintains a small base at Tartus on Syria's Mediterranean coast. Syria is currently locked in a civil war between government forces and rebels that the UN estimates has cost the lives of at least 30,000 people, while other estimates put the death toll at around twice that number.