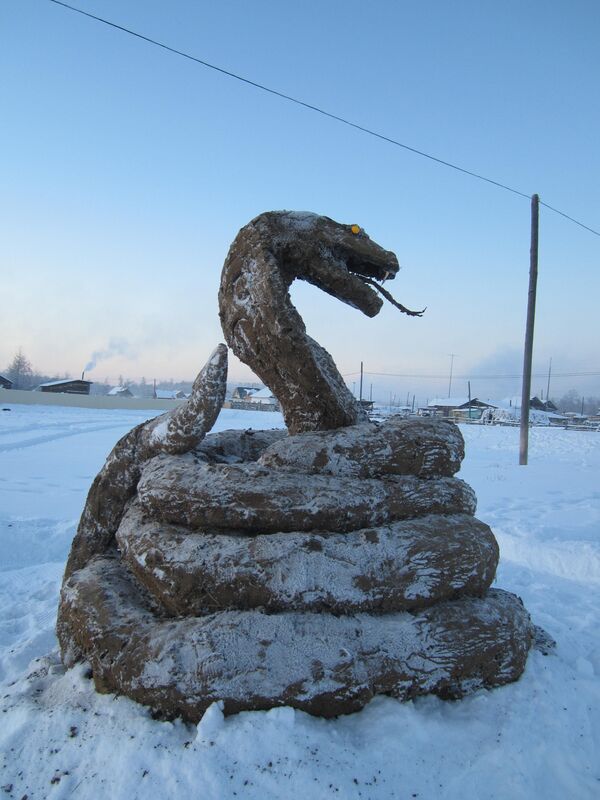 © Photo : Naryya Bopposova
Subscribe
International
India
Africa
When Piero Manzoni canned his feces and put it up for sale as artwork in 1961, he was driven by his loathing of “capitalist pigs.” But when Mikhail Bopposov, born the same year, created a giant cobra out of frozen cow dung, he did it for the children.

MOSCOW, January 11 (Alexey Eremenko, RIA Novosti) – When Piero Manzoni canned his feces and put it up for sale as artwork in 1961, he was driven by his loathing of “capitalist pigs.” But when Mikhail Bopposov, born the same year, created a giant cobra out of frozen cow dung, he did it for the children.

“I made it so the kids could play around and have some fun,” the native of the Siberian republic of Yakutia told RIA Novosti by phone Friday, speaking about his 400-kilogram creation.

The snake – coiled, with head upright and hood widened – is on display in the village of Yolba, about 300 kilometers east of the republic’s capital, Yakutsk.

The installation was created to mark the coming of the Year of the Snake, which begins February 10 according to the Chinese calendar, Bopposov said.

Cattle-breeding is widespread among Yolba-ites, who number about 500. Though Bopposov works as a building manager at the village school, his 17 cows provide him with an ample supply of dung, or “balbalkh” as it is known in his native Yakut language.

“This is not sculpture, just a piece of work I did,” Bopposov said modestly when asked about his artistic aspirations.

Bopposov first dabbled in the medium in 2008, when, inspired by his military service in a tank division, he created a tank out of dung. Encouraged by the reception from local children and adult villagers alike, he proceeded last winter to mark the Year of the Dragon by sculpting a winged serpent, also using cow excrement.

Yolba villagers likewise sculpt from snow and ice – Bopposov and his son contributed a rabbit in the Year of the Hare in 2011 – but the medium is not as convenient, becoming hard to shape when temperatures fall far below freezing. January temperatures in the Tattinsky district, where Yolba is located, hover between minus 42 and minus 44 degrees Celsius.

Come spring, the dung sculptures are always dismantled, both out of aesthetic concerns and because “balbakh” is a valuable fertilizer that is sold for compost or used locally in the fields during Yakutia’s short summers.

“Guess I’ll have to try to do a horse in 2014, if I can pull it off,” Bopposov said with a laugh, carefully enunciating the words in his correct, but heavily accented Russian.

(Updates with corrections to age and distance in paragraphs 1 and 3.)