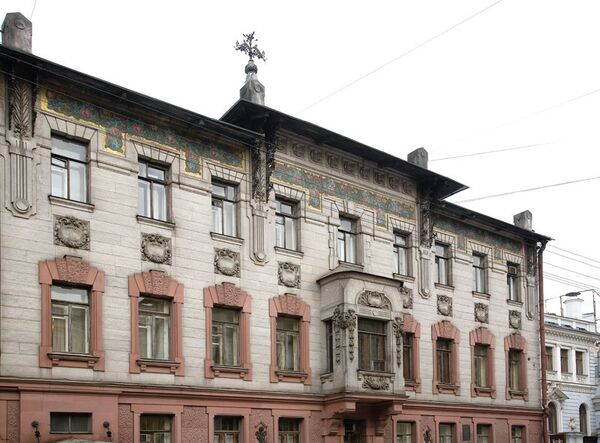 Moralizing ultraconservatives struck again in Russia’s northern capital of St. Petersburg, where a museum of famous writer Vladimir Nabokov was attacked over “pedophilia.”

A note stashed in the bottle threatened the museum with “God’s wrath” over its alleged propaganda of Nabokov’s pedophilia, the report said.

The museum received a handful of mistake-ridden anonymous letters with similar homilies over the past months, its director Tatiana Ponomaryova was cited as saying.

Police were looking into the incident.

St. Petersburg-born Nabokov is best known for “Lolita” (1995), a pedophile’s story, but was never accused of child abuse himself.

A separate anonymous letter reportedly mailed to Fontanka.ru identified the attacker as the leader of a group of self-styled “St. Petersburg Cossacks” who earlier mounted non-violent attacks on the city’s cultural establishments.

A one-man show based on “Lolita” was canceled in St. Petersburg by its author last fall after he received threatening letters from the anonymous “Cossacks.”

The city prosecutor’s office was also flooded with dozens of identical reports in December accusing an exhibit at the Hermitage museum by British artists Jake and Dinos Chapman of extremism over “blasphemous” crucified toys on display. A prosecutor check found no evidence of extremism, the Chapmans offered “extreme apologies” to whomever felt offended, and the Hermitage's director demanded an investigation into the complainants, to no visible result.

But the Cossacks have now decided to employ “non-Christian” virtue enforcement methods, which prompted a split, said the letter to Fontanka.ru, whose author identified himself as belonging to the moderate non-violent group.

St. Petersburg never had a native Cossack community, and other Cossack groups across the nation have denounced the actions of their alleged northern brethren.

However, other Cossacks have also attempted to act as a conservative militia, patrolling streets of Moscow against illegal migrants, peddlers and parkers, and attacking modern art exhibits in the southern Krasnodar Region, a Cossack heartland. Non-Cossack Christian activists have also attacked in Moscow a sex museum and supporters of the feminist punk band Pussy Riot.