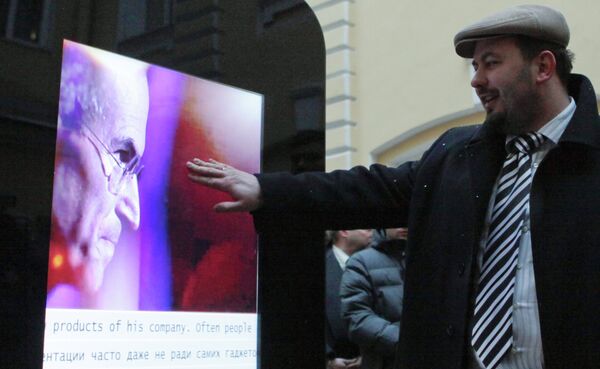 A memorial to world renowned tech innovator and Apple co-founder Steve Jobs was unveiled in St. Petersburg on Wednesday.

The monument, a giant replica of a black, late model iPhone with a screen that displays a photo and video slideshow of Jobs’ life, is located in the courtyard of the St. Petersburg National Research University of Information Technologies, Mechanics and Optics.

On the back, the monument features a QR code which observers can scan before being directed to a website commemorating the Apple co-founder.

The Progress IT Fund held a competition last year to select a designer for the monument. Out of more than 200 project ideas, the fund chose St. Petersburg native Gleb Tarasov’s, entitled “Sunny QR Code.”

Jobs, credited with helping to build Apple into a computer giant, died in October 2011 after a long battle with cancer.

Apple products, among them the iPhone and iPad, enjoy widespread popularity among mostly urbanized, middle- and upper-class Russians.