In Electronic World, the Paper Check Persists in US 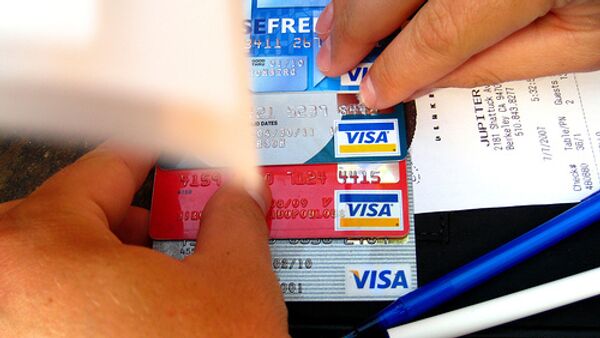 The humble paper check has all but vanished from much of Europe—including Russia, where it is virtually nonexistent in financial transactions—but across the ocean in the United States, it just won’t fold.

WASHINGTON, January 9 (By Carl Schreck for RIA Novosti) The humble paper check has all but vanished from much of Europe—including Russia, where it is virtually nonexistent in financial transactions—but across the ocean in the United States, it just won’t fold.

The payment method widely seen as archaic, expensive and inefficient remains a uniquely entrenched feature of the US economy—even as plastic cards and electronic and mobile payments steadily eat away at its edges.

“I don’t think it’s even feasible to abolish checks when they are as ubiquitous as they are in the United States,” Felix Salmon, a financial blogger for Reuters, told RIA Novosti.

The US government is chipping away at this ubiquity, however. The US Treasury Department has set a March 1 deadline for recipients of Social Security and other federal benefits programs to sign up for electronic payments in lieu of receiving checks.

Treasury officials said this week that a direct deposit of funds is 92 cents cheaper than sending out a check, and that continuing to mail out checks would cost American taxpayers $1 billion over the next decade, CNN reported this week.

Some 23 billion checks were written in the United States in 2010, more than in any other country in the world, according to the World Payments Report 2012, a study produced by the Royal Bank of Scotland.

That figure is down from 24.5 billion checks with a value of $31.6 trillion written in the United States in 2009, according to the most recent Federal Reserve report on noncash payments.

The use of checks in the United States—as well as globally—has steadily declined in recent years amid the rise of credit and debit cards, which accounted for 60 percent of all US noncash transactions in 2009, up 14.6 percent from 2006, according to the Federal Reserve.

Just a decade ago, however, the paper check was the most popular method of noncash payment in the United States, the result of a trend that began after the US Civil War and snowballed in the 20th Century.

For many Americans, there is a level of trust and certainty associated with the process of filling out a check and endorsing it to pay for goods or services, said William Roberds, a research economist and senior policy adviser at the Federal Reserve Bank of Atlanta.

“Once you’ve put that system into place, there is just a lot of inertia,” said Roberds, co-author of a historical survey on the history of the check as a payment method. “A lot of it is convenience, a lot of it is pricing, and a lot of it is a sort of legal certitude.”

Several European countries have essentially scrapped paper checks altogether and made it exceedingly simple for individuals to move money between bank accounts.

But for many of these countries, the check had never been a significant payment method to begin with, Roberds said.

“For the United States to put the same kind of systems in place, it would take a very big change,” he said. “It would be almost a change in the philosophy of the banking system.”

Making such systemic changes unlikely is the structure of the Federal Reserve Bank system itself, which consists of 12 different banks and makes coordination difficult, said Salmon, the Reuters financial blogger.

“You can’t abolish the check without replacing it with something better,” Salmon said. “And for various reasons, which I think are mostly to do with the structure and the ideology of the Federal Reserve, that hasn’t happened.

An analyst with the federal government specializing in banking matters said the check does have some competitive advantages compared to other payment methods.

The upfront costs of establishing electronic payments systems can be expensive, though those costs have declined as well, the analyst said on condition of anonymity because he was not authorized to speak to the media on the subject.

“Aside from cash, the check is the other default way of making a payment that can be executed between two parties with very little fanfare,” the analyst said.

A much-needed “revolution in payments” will only happen if the Federal Reserve acts to replace the US check-clearing system with a “secure, free, instant method for anybody with cash to move,” Salmon, the Reuters financial blogger, wrote last year in The Atlantic magazine.

The Treasury Department, meanwhile, has embarked on a last-minute scramble to get the word out about the March 1 deadline for federal benefits recipients to enroll in an electronic billing program.

The coordinator of the drive, Walt Henderson, even sent a letter to the iconic American advice column “Dear Abby” this week asking readers to sign up.

Those who do not enroll in the direct deposit program will still be able to receive checks, but the Treasury Department plans to conduct a targeted outreach to these individuals.

The Treasury campaign’s website notes that more than 540,000 Social Security and other benefits checks were reported lost or stolen in 2010.

Salmon, a British national, expressed wonderment at the fact that after 15 years in the United States he continues to receive checks in the mail.

“The US Postal Service?” Salmon told RIA Novosti by telephone. “Is that really how the payment system works? It’s insane.”