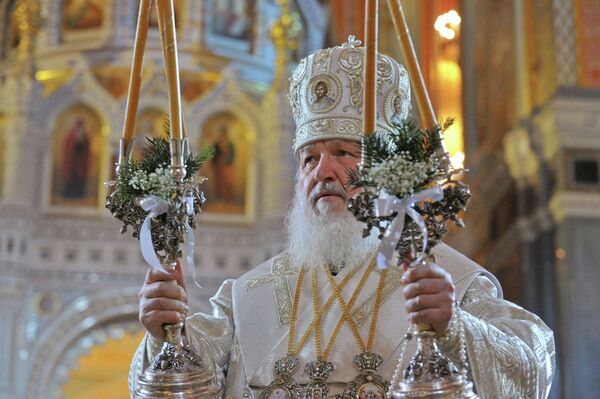 The head of the Russian Orthodox Church, Patriarch Kirill, congratulated all Russians with Christmas on Monday and called to take an active part in adopting orphans.

MOSCOW, January 7 (RIA Novosti) – The head of the Russian Orthodox Church, Patriarch Kirill, congratulated all Russians with Christmas on Monday and called to take an active part in adopting orphans.

His call comes in the wake of a controversial law which came into force in Russia on January 1 and in particular bans adoption of Russian children by American families.

“Namely in regard to Christmas celebrations I would like to call on all of you, who can take an important step aimed at adopting children and supporting orphans – do take this step,” the Patriarch said in his Christmas address.

“There must be no orphans in our country. Those, who have no parents, should find them among kind, honest and warm hearted people,” he added.

The adoption ban, signed by Russian President Vladimir Putin on December 28, is part of Russia’s response to the US Magnitsky Act, which was signed into law by US President Barack Obama earlier in December.

Critics of the adoption ban said it would keep tens of thousands of children, especially those with disabilities, in Russia’s orphanage system. Figures from the US State Department show that more than 60,000 Russian children were adopted by American families in the last 20 years, including 962 last year.