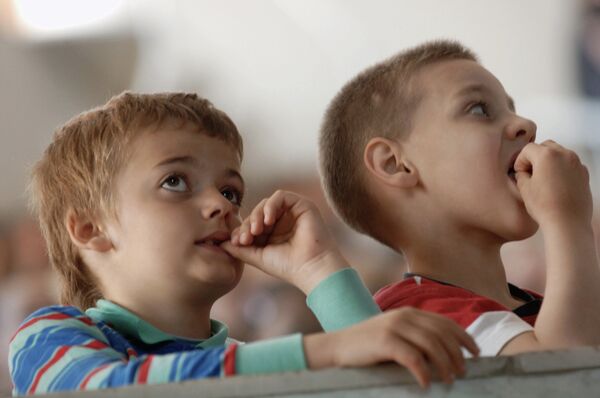 © RIA Novosti . Vladimir Viatkin
/
Go to the photo bank
Subscribe
A controversial law which in particular bans adoption of Russian children by American families is coming into force in Russia on Tuesday.

MOSCOW, January 1 (RIA Novosti) - A controversial law which in particular bans adoption of Russian children by American families is coming into force in Russia on Tuesday.

The adoption ban, signed by Russian President Vladimir Putin on December 28, is part of Russia’s response to the US Magnitsky Act, which was signed into law by US President Barack Obama earlier in December. The act introduces sanctions against Russian officials suspected of human rights abuses and is named after Sergei Magnitsky, a whistleblowing lawyer who died in a Moscow pre-trial detention center in 2009.

The Russian public has been largely supportive of the new law, with 56 percent of respondents in an opinion poll conducted by the Public Opinion Foundation (FOM) saying they backed a ban on US nationals adopting Russian children.

Critics of the adoption ban said it would keep tens of thousands of children, especially those with disabilities, in Russia’s orphanage system. Figures from the US State Department show more than 60,000 Russian children adopted by American families in the last 20 years, including 962 last year.

Russian officials blame US adoptive parents for the deaths of at least 19 of those children. The new law is named for Dima Yakovlev (Chase Harrison), a Russian toddler who died of heatstroke in 2008 after his American adoptive father left him in an overheated car for hours.

The ban halts the adoption of 46 Russian children by US families whose cases are currently being processed.

A number of Russian ministers, including Foreign Minister Sergei Lavrov, have criticized the bill, which was approved by the State Duma - the lower house of parliament - on December 21 and by the Federation Council - the upper house – on December 26.

While the adoption ban is the most controversial aspect of the proposed legislation, the bill puts forward other retaliatory measures as well, such as banning alleged US abusers of Russian citizens’ rights from entering Russia and freezing any assets they may have there.

A deputy from Russia’s ruling United Russia party, Robert Shlegel, on December 28 wrote on his Twitter microblog that he has submitted to the State Duma an amendment to the Dima Yakovlev law, saying he decided to submit the amendment because a total adoption ban would mean some disabled children might be unable to find their family.