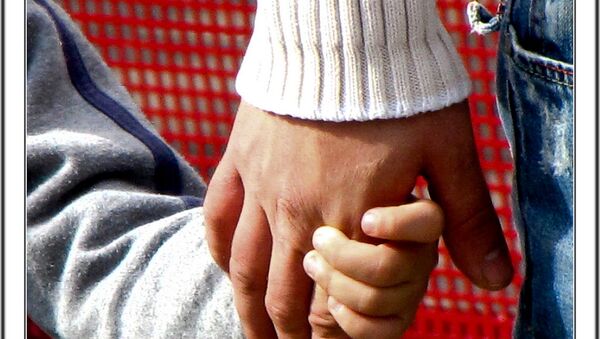 Somewhere in Texas, there’s a pink room full of toys and books, waiting for a little girl who may never come home.

WASHINGTON, December 27 (By Maria Young for RIA Novosti) - Somewhere in Texas, there’s a pink room full of toys and books, waiting for a little girl who may never come home.

“We’re pretty heartbroken, honestly,” said Donna Thomas in an interview with RIA Novosti on Thursday. She and her husband Robert are in the process of adopting a five-year-old child from Russia.

“To us, she’s already our daughter,” said Thomas.

But adoptions of Russian children by American parents have been suddenly and unexpectedly sucked into the political quicksand of a dispute between the two countries that threatens to halt Russian adoptions for all American families, including dozens, possibly hundreds, like the Thomases, who have already met the child they’ve been matched with and planned to bring home in the coming new year.

Word on Thursday that Russian President Vladimir Putin had announced his intent to sign legislation banning Americans from adopting Russian children rippled through the close knit US adoption community like a shockwave, leaving families with little understanding of the politics behind the dispute and little hope of resolving it anytime soon.

“I don’t see how one of those members of (Russian) Parliament can look at those children and say ‘this is what’s best for you, you could have had a home and a family and now that’s not going to happen,’” said Bill Deutsch. He and his wife, Valerie, are in the process of adopting 13-year-old Tim and 11-year-old Ana from Russia, both are HIV-positive.

Deutsch has followed the developments closely, and is baffled by what he and many others view as a willingness on the part of Russian politicians to use vulnerable children as pawns.

“The Russian government has been very insistent that they need to place Russian children with Russian families, and I understand that,” he said. “But this little boy was literally left on the steps of the orphanage 13 years ago, and nobody’s stepped up yet. The thought that somebody’s going to magically come forward now, it just isn’t realistic.”

Most children age out of Russian orphanages when they turn 16, and many end up on the streets ill-equipped to fend for themselves or make a living, said experts on Russian adoptions.

“He (Putin) said they’re working on a plan to try to encourage adoptions in Russia, and that’s great, but that’s not going to come up to speed in three years. That’s a lot of people to find homes for,” Deutsch added.

UNICEF says there are about 740,000 children without parental care in Russia, according to the Associated Press.

Figures from the US State Department show more than 60,000 Russian children adopted by American families in the last 20 years, including roughly 1,000 in 2011.

But there have been a handful of problems over the years. Russian officials have repeatedly expressed concern about the safety of Russian children adopted in the United States, and they have cited 19 cases in which Russian children have died at the hands of their adoptive American parents.

Earlier this year, negotiators from both countries came to agreement over a new inter-country adoption treaty that addresses many of the concerns of Russian officials.

But tensions erupted over an unrelated matter last month when American lawmakers approved legislation known as the Magnitsky Act, which calls for sanctions against Russian citizens deemed by the US to have violated human rights. President Barack Obama signed the bill into law Dec. 14.

It is named for Sergei Magnitsky, a Russian whistleblower lawyer who died in a Russian prison in 2009 after accusing officials of being involved in a multi-million dollar tax fraud scheme.

The Magnitsky Act angered Russian lawmakers, who passed their own human rights legislation, including the adoption ban, named for Dima Yakovlev (Chase Harrison), a Russian toddler who died of heatstroke in 2008 after his American adoptive father left him in an overheated car for hours.

The bill is heading to Putin’s desk, where he said on Thursday that he will sign it into law.

Critics say the legislation needlessly impacts Russian children in need of parents, particularly older children and those with special needs.

“They are not given adequate health care, adequate education, anything, it’s terrible,” said Andrea Roberts, co-founder of Reece’s Rainbow, a US non-profit fundraising and advocacy organization which supports parents adopting special needs children from all over the world, including Russia.

“And now, they’ve become casualties of war,” she said.

Roberts is distraught about the lack of care many children in Russian facilities receive. But she is also furious with politicians on both sides of the standoff.

American lawmakers should have known what to expect, she said. “We’re basically in a pissing match between these two governments,” she said.

“It’s almost laughable. Congress can’t even pass a budget and somehow, they manage to come together and do this? The US feels compelled to ban the officials who may or may not have caused the death of this one man in Russia – and with everything else that’s going on in this country, that’s their priority?”

She struggles for words to express her anger, and pauses, finally saying quietly, “There is no way our Congressional leaders didn’t know this would happen. They had to have known the Russians would play the orphan card.”

"Penalizing innocent children in orphanages as a matter of Russian foreign policy is embarrassing,” US Sen. Ben Cardin, one of the authors of the Magnitsky legislation, said on Thursday in a statement to RIA Novosti. “The Kremlin will sink to a new low if it implements this law.”

On Thursday, Russian embassy officials in Washington acknowledged receipt of a petition and letter addressed to Putin from disabled Russian adoptee Sasha D'Jamoos, 21, now a college student who has climbed Mt. Kilimanjaro using prosthetics and is an outspoken advocate for Russian adoptions.

The petition urges Putin not to sign the adoption ban.

It was delivered to the embassy by Tatyana McFadden, 23, another disabled Russian adoptee and a Paralympic medalist with a following of fans in both countries.

“I know the difference it made for me getting adopted,” she said. “My life changed drastically. No one wanted to adopt a little girl with a disability.”

An embassy spokesman confirmed Thursday that the petition, with nearly 10,000 signatures, had been passed on to Moscow.

Prospective parents in America are clinging to the hope that Putin will recognize the impact an adoption ban would have on Russian children and decide not to sign the bill.

“In my heart of hearts, I still can't believe that this ban will really become law. It is just that inhuman. It does nothing to respond directly to the Magnitsky Act. It does nothing to improve the plight of a single orphan. And young people like Tim and Ana will wind up on the street,” said Bill Deutsch.

“I would challenge any Member of Parliament or even President Putin - to look Tim or Ana in the eye on the day he or she walks out of that orphanage to face a dangerous future and say, ‘Good luck. At least we didn't let you go to America.’”