Putin: 'No Reason Not to Sign' US Adoption Ban 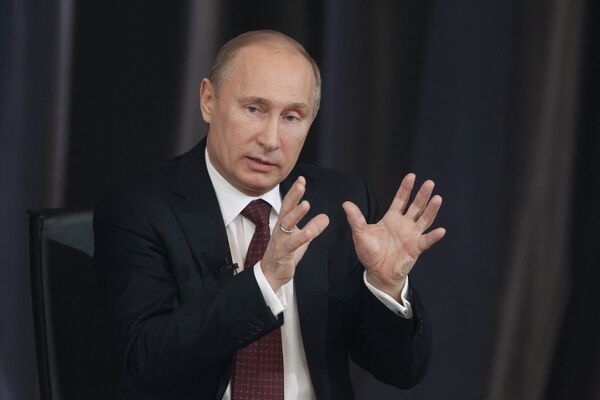 Russian President Vladimir Putin said on Thursday he plans to sign into law a controversial bill banning US nationals from adopting Russian children.

“I already received this draft law today from the Federation Council. I have not seen any reason why I should not sign it, although I have to consider the final version and think everything over,” Putin said at a meeting of the State Council, a presidential advisory body.

The president said he also intends to sign a decree to provide support to orphans and children in Russia with serious health conditions.

Putin also said that the US authorities have not provided access for inspectors to check on the condition of adopted children.

“There are probably many places in the world where the living standards are better than ours. Will we send all children there?” Putin asked rhetorically. “Will we also move there?”

Should Putin sign the bill, the law will come into force on January 1, 2013, halting the adoption of 46 Russian children by US families whose cases are currently being processed, Russia’s ombudsman for child rights, Pavel Astakhov, said on Wednesday.

A number of Russian ministers, including Foreign Minister Sergei Lavrov, have criticized the bill, which was approved by the State Duma - the lower house of parliament - on December 21 and by the Federation Council - the upper house - on Wednesday.

The proposed ban is part of Russia’s response to the US Magnitsky Act, which was signed into law by US President Barack Obama earlier this month. The act introduces sanctions against Russian officials suspected of human rights abuses and is named after Sergei Magnitsky, a whistleblowing lawyer who died in a Moscow pre-trial detention center in 2009.

The adoption ban under consideration in Moscow is named after a two-year-old Russian boy, Dima Yakovlev, who died in 2008 in the US after being left in a car in hot weather by his adoptive father. The father was later acquitted of manslaughter.

The Russian public has been largely supportive of the bill, with 56 percent of respondents in an opinion poll conducted by the Public Opinion Foundation (FOM) saying they backed a ban on US nationals adopting Russian children.

But opponents of the bill accuse MPs of using orphans as political pawns, and the opposition newspaper Novaya Gazeta has collected over 100,000 signatures in an online petition against the ban. The head of the Kremlin's council on human rights said last week that he supported the ban, but also called for a reform of the adoption system to allow Russians to more easily adopt Russian children.

Experts have said the bill, if adopted, would harm Russia’s international image.

While the adoption ban is the most controversial aspect of the proposed legislation, the bill puts forward other retaliatory measures as well, such as banning alleged US abusers of Russian citizens’ rights from entering Russia and freezing any assets they may have there.