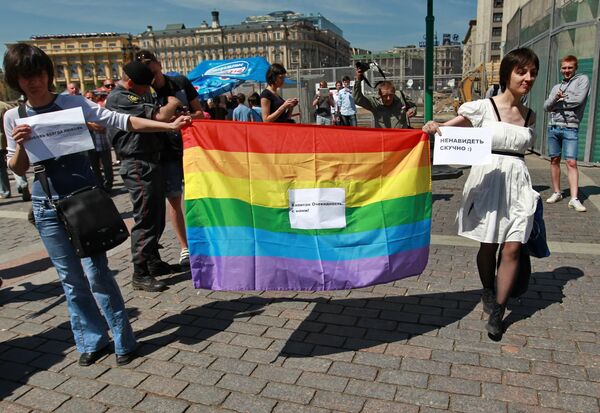 © RIA Novosti . Andrei Stenin
/
Go to the photo bank
Subscribe
Bucking a post-Soviet trend toward limiting the rights of gays, the Moldovan parliament voted in the crucial second reading to impose fines for discrimination against sexual minorities, local media said on Thursday.

MOSCOW, December 27 (RIA Novosti) – Bucking a post-Soviet trend toward limiting the rights of gays, the Moldovan parliament voted in the crucial second reading to impose fines for discrimination against sexual minorities, local media said on Thursday.

The rule sets fines for discrimination against minorities, including representatives of the LGBT community, in employment relations at up to 9,000 Moldovan lei ($750), the local edition of Komsomolskaya Pravda said.

The bill also said that discrimination that led to death or suicide can carry a prison sentence of up to six years, the newspaper reported. However, the bill’s vague wording did not make it clear whether the jailing clause also applied to sexual minorities. An emailed request for clarification sent to the Moldovan parliament on Thursday went unanswered in time for publication.

The bill has to pass the final third reading, the date for which was not reported as of Thursday.

The new law expands on a broad legislation on equal rights lobbied by the European Union that was passed last May by Moldova’s ruling party, the Alliance for European Integration.

The bill passed in May banned discrimination against minorities, including sexual minorities, but did not spell out any legal mechanisms to enforce it.

Though reserved by foreign standards – it explicitly bans gay marriages and adoptions – the bill generated a flurry of protests from Moldovan Orthodox Christians who said it endorsed “sodomy.”

Male same-sex relationships were banned in the Soviet Union and remain a criminal offense in the Central Asian republics of Turkmenistan and Uzbekistan.

The Russian parliament plans to consider next year a nationwide ban on “gay propaganda” – already enforced in some regions – and so is its Ukrainian analog, the Verkhovna Rada. In 2009, a similar ban was imposed in Lithuania – a post-Soviet republic that is now an EU member – despite protestations from the European Parliament and Amnesty International.