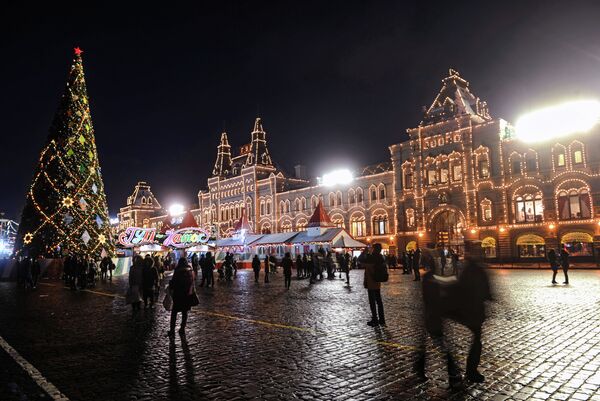 MOSCOW, December 27 (RIA Novosti) – The 10-day New Year holidays that begin in Russia on Sunday will be “ten days of hell,” the country’s top public health official warned on Thursday.

“Most of our citizens will be left to their own devices. And there is no worse enemy for a Russian than himself,” Gennady Onishchenko told journalists.

Russians finish work on December 29 to prepare for New Year and do not go back to work until January 9. The period invariably sees an increase in public drunkenness and fires.

Onishchenko predicted rampant alcohol consumption and gluttony leading to an “unhealthy atmosphere” in households across the nation over the festive period.

He urged Russians with children not to drink on New Year’s Eve. “You will be greeting the New Year with your family and, as head of the family, you will be setting a bad example,” he said. “Or are you not happy to be with your family?”

At least come 2015, the government will crack down on smokers and “those who worship the pagan deity Bacchus,” Onishchenko said, referring to a Roman god of wine.

A harsh anti-smoking law was filed in the Russian parliament earlier this year, and legislation aimed to curb alcohol consumption is also in the works.

Some 23,000 people die of alcohol poisoning annually in Russia, while another 75,000 die of alcohol-related diseases, according to official statistics.

Russians were the world’s fourth heaviest drinkers in 2011 with annual consumption of 11 liters of pure ethanol per every citizen older than 15 years, according to the World Health Organization. Only Moldova, the Czech Republic and Hungary drank more.

The “ten days of horror” will also see most of the public turned into couch potatoes by “mindless” TV programs, Onishchenko said.

Onishchenko, 62, who has held the post since 1996, has made a name for himself by being able to find a public health angle in almost any public event.

He weighed in on punk band Pussy Riot’s trial in August, and managed to come up with criticism of anti-Kremlin rallies in Moscow last winter by warning that protesters will risk their health by gathering outside in the cold.

Also in August, amid an anti-drink-driving campaign, he warned his countrymen not to get behind the wheel if they had drunk kefir, a fermented dairy product with less than one percent alcohol.

“Are you going to get behind the wheel, or drink kefir?" he said, triggering a storm of online mockery.

Last December, ahead of a mass protest in Moscow against alleged vote-rigging in favor of Vladimir Putin’s United Russia party, Onishchenko warned Russians against attending, saying they would be in danger of catching a cold.

Onishchenko’s watchdog, the Federal Consumer Protection Service, was also accused of political meddling over its frequent bans of food exports from countries embroiled in diplomatic standoffs with Russia.

The watchdog has banned Georgian and Moldavian wine, Belorussian milk and, most recently, US meat exports to Russia, though it has always denied political motives to the bans.